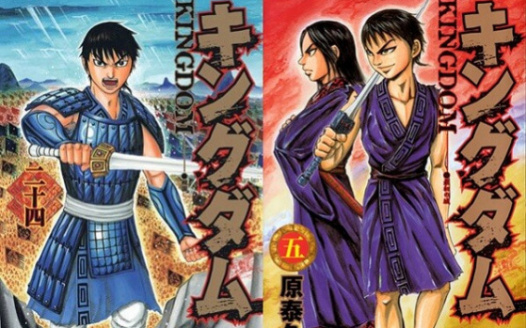 Let’s Get Kingdom An English Publisher!!

“Kingdom” is a Japanese manga series published by Shueisha Inc. that, in recent years has skyrocketed in popularity. An incredible work of historical fiction based on the Warring States period of China, by author Hara Yasuhisa, the incredible art, gritty depiction of war, epic character moments, and incredible storytelling has made it one of the most popular ongoing manga. According to Anime News Networks annual count of most volumes sold, this series, from 2015-2017 has finished 5th, 3rd, and 3rd respectively. This is astounding due to the fact that most manga series volumes sales are, in large part inflated by their anime adaptation. Kingdoms first anime season was in 2012 and objectively spea...it was not good.... The second season followed in 2013 and ended in 2014. The second season while a slight improvement, did not do the series justice. That opinion can be justified in the fact that, going by manga volume sales, series it has sold more than since 2014 (its last anime adaptations of end) other series have had far superior anime adaptations and yet somehow the series still sales like one of the best. Point being, this series is insanely popular by manga readers everywhere, despite the lack of a medium to promote international popularity. (Ala anime) As an American fan of this manga series I belong to many online communities and see the popularity of the series. It’s beloved and an English publication is in quite a demand. I want Viz to see how beloved it is, the demand for an English publication, and to relay the idea to Shueisha how an English publication could promote international growth... (a well done anime could do that but that’s not what we’re here for lol) Sign this petition and let Viz know how much would appreciate an English publication of an incredible series like Kingdom.