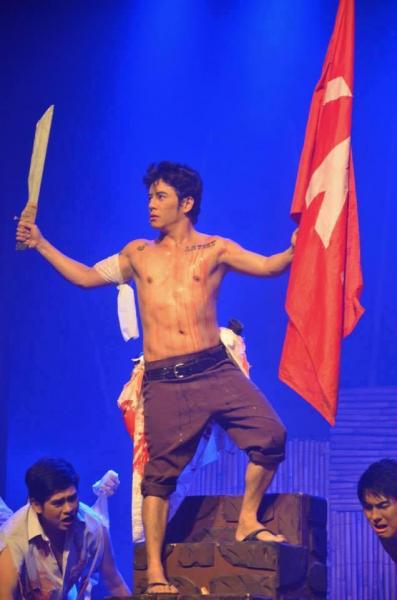 For over 10 years, Philippine Stagers Foundation continuously defines the true meaning of theater arts through their various original stage plays. Their passion on this field provides not only enormous lessons but also the determination and hope to their audiences. The awards that they received from various theater award giving bodies and the non stop support of their fans serves as proof of their success. But just like all other companies, they wouldn't reach such stage without what others called as "crowned jewel" or "heart" of the company.

Atty. Vincent M. Tañada is the crowned jewel and the heart of PSF. Although he wrote and directs almost all of their plays and gave lyrics to their songs, his passion for the field didn't just end up there. He also acts, sing and dances in their stage plays.
His mastery in acting didn't just captured the hearts of their audience. It also captured the hearts of different award giving bodies who recognized his talent by giving him awards as best actor. Through his acting, PSF Plays shines brighter than any other plays in the eyes of their fans.
And now, after 5 consecutive years of both acting and directing their stage plays, Atty. Tañada gave a news that make his fans in to total loss. In the upcoming season of PSF, he isn't allowed to act anymore. This news struck the whole world of his fans and therefore conclude that: wedidn't want that to happen.
This petition is created to collect signatures from Atty. Tañada's fans. This will serve as a request to his theater committee to allow him act on stage on the next seasons. Whatever result this could make, Atty. Tañada is not accountable for any of his fans actions. The fans only wanted to see the person that they idolizes most to act on the theater stage. The stage where all of them first ever knew that there is a Vince Tañada, who could inspire them and change their perspective in life.
Performing is a privilege, not a right.