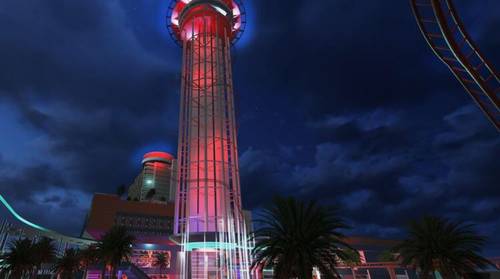 Orlando, the entertainment hub of the world, an internationally known city, a city growing exponentially outwards, and not growing in...today Orlando and its future are at mortal risk of city and county stagnation, less tourist money, higher taxes if that happens. I'm a fourth generation Central Floridian, and as a potential future resident once again question Orlando's ability to handle change. To not abide by the laws of three major corporation's who to me...have bought out the competition and instead of growing themselves ask to destroy a potential beautiful development that...yes will stand beautifully lit and passed FAA regulations, at 700 feet at the arguably busiest intersection in all of Orlando. North I drive. The plan is expected to create thousands of temporary and thousands of permanent jobs that no other project can...or has been put forward. Most American cities or world class cities have a symbol. This building, its height is exactly what is needed in the Urban areas of Orlando, not just to ensure the area does not collapse into depression like many Midwest cities who depended on just a few major organizations...which have destroyed the cities, but to densify the area and look upward towards building as opossed to countless suburban sprawl communities which have created more traffic, destroyed more woodlands and wetlands then countable and is the EXACT reason traffic and congestion is created. Universal Studios has put all their might in fighting this building, arguing the height is unfair...then THEY should address the county about THEIR own height restrictions, NOT hold other developers hostage with absurd arguments about "light pollution" (which I remember actually fondly seeing Universals Hollywood lights as a child. I remember loving seeing downtown Orlandos buildings and was shocked to find a city the size and will continue to grow, could not even have a building as tall as Seattle or Hartford Connnecticut (900 feet Seattle 570 feet Hartford). If you even think hard about it, if you are close by or your home has a view of this project, together with the Orlando Eye, this project, the I Square Mall and Universal, if developers continue, home values nearby will likely increase significantly as what happened to homes near Lake Eola after the development of more high rise condominiums and urban development, homes today are significantly more valuable and the ability to rent or sell a home will be drastically higher and internationally desired.

If any city intends to continue developing and playing a part in the world, it has to be able to allow buildings tall enough to put major industries headquarters in. This roller coaster/building/drop ride is the perfect opportunity for those opposed to taller buildings to draw the limit, however it is also a very potent symbol of Orlando and would quickly become a worldwide symbol, bucking the mouse ears from permanent domination. While I love my hometown I question moving back after seeing the strides other more progressive cities make and the great many jobs, tax revenue and urbanism this could create. It's name is International Drive...that should mean the very county that took a chance on Disney, Universal and Seaworld to great measures of success, should not buy out the county, or buy out its people. If this is built, it will create along with Downtown Orlando's urban centers and relax traffic and more sprawl and more cheap tourist traps. This is about greed, and potential corruption in the government of Orange County. Universal is one voice, but that's it one.....the rest is our voice. Orlando in my opinion is getting a professional soccer team and these theme parks develop themselves regardless of the tourist traffic, now is the time to speak out. If you are I favor of this project, and oppose corporate city buy outs, and want to start densifying the city to protect wetlands, and restrict intense development to I drive and Downtown Orlando, this would set the precedent of where the center of Orlando is, and that it is an exciting city that takes risk...the alternative is all other developers seeing proposals shot down in Orlando and deciding "let me build this in Tampa (with the beach one county over and Bush Gardens...Orlando would loose jobs, respect, tax money, and continue to spread every which way with no center to look to, to properly develop only certain areas intensely, and allow the outskirts to be peaceful. This buildings location and height is perfect, if Universal has problems with restrictions on them than THEY should change THEIR restrictions, not knock down a competitor which in NO WAY will draw away tourist. It will in fact bring more to them, This has been discussed globally this project, and no one should have to stagnate for cities being "bought out". This street International Drive was designated to be the urban and intensively developed area, as to why thousands of good paying jobs and tourist taxes that can keep the citizens taxes down...is clearly a disaster which reverberations that can put Orlando into the road of the rust belt cities, when Disney or Universal tire out. It is urgent to send this message to the county, and developers to "build this the way it is, make it beautiful, and THEN debate height limits, don't destroy the city that has the most potential out of fear. Thank you.

Add on: thank you so much for your support, it real is having an impact, the Orlando Sentinel has reported on our petition, the Orlando Business Journal, Click Orlando, and possibly others. However remember Universal and Orange County have deep pockets and others may complain to the county about the height or the project, if you are local spread this petition as far as possible. If you go to high school or college spread this around your school so more sign it, if you are local sign and comment, if you are international LET YOUR VOiCE BE HEARD! Don't let anyone find a absurd reason to block this monumental archtectural achievement and incredible development. If you want to help even more, call Orange County and their commissioners and leave a message of support Just because it's hit 1,000 doesn't mean it should end, let's go for a million!

my YouTube video promotion for this project, I made a second video where I sound more confident. Lol. Thank you again!

(I am in no way associated with or benefiting from this development, I took the decision to create this on my own volition. Considering my families deep roots in Central Florida I only want to see the best for the region)