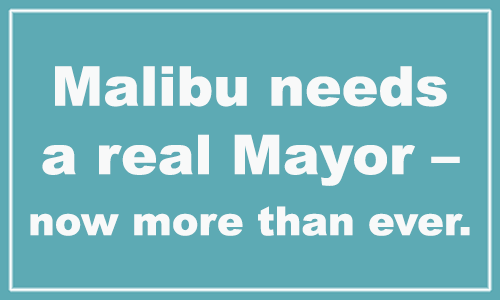 Let Malibu voters decide whether to have an elected mayor or not.

The citizens of Malibu reserve the right to determine the future of our city, and we would like the Council to honor that. Since we're already voting in November to decide whether to have Council members elected from separate districts, this is the right time to let us vote on whether to separately elect a Mayor. The option is expressly provided in a companion section of the California Government Code (§34900 et seq). It’s simple – the code actually tells you what to print on the ballot.

Having a citywide Mayor will be important if the City has to carve itself up into council districts, as could happen on November’s ballot or through pending litigation. Separate districts would divide the community, with councilors competing against each others’ interests. And we’d see swapping of political favors, which doesn’t produce smart policy.

In contrast, an elected Mayor would give voice to common, citywide interests, helping to turn conflict into consensus, promoting unity.

Also, as the City interacts with the wider world, we need a captain at the helm. When there’s a disaster, the Mayor should be there at the Emergency Operations Center, and in front of the cameras. Similarly, when the City deals with outside agencies such as MRCA or Caltrans, you want a leader at the table, because career bureaucrats won’t respect a mere district Councilor. That’s basic psychology.

In short, an elected Mayor can help to counter threats of fragmentation that come from both inside and outside the City.

Even if you think the current "Mayor-go-round" system is fine, at least give voters the opportunity to choose for themselves, along with the choice of whether the Mayor’s term should be two years or four years (as provided in the code).

Thanks for your time!