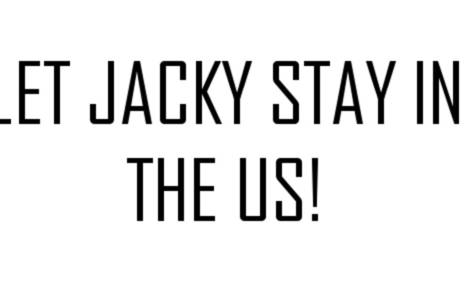 Let Jacky stay in the US!

Jacky is a young girl from Germany, currently studying abroad in the United States. It has been her dream to experience the American way of life for 5 years and she managed to realize her dream through scholarships and a lot of effort. Having finally made it to the US she now encountered the problem that she is threatened to get sent home.

Jacky is an intelligent student; getting straight A+'s in school, studying a lot, turning in any assignments, and always doing her homework - Exactly the way it's supposed to be.

But in February, she once missed one period because she got homesick and just needed to talk to her mother in Germany. After talking to her on the phone, she went back to her next period as she is supposed to. Her host mother told her organisation YFU USA about this though which said that if Jacky is ever going to skip again, she will get sent back to Germany.

Tuesday morning, May 10th, Jacky overslept so one of her friends picked her up to school, and stopped by Dunkin Donuts. Because of a delayed snapchat, her being 10-15 minutes late to class, and a mistake of a teacher marking her absent got her host mom really suspicious and concerned. She did not believe Jacky that she didn't skip first period, even though her teacher gave her a call, so she told her organization YFU USA that she skipped the period, which got her into a lot of trouble.

But her host mother also told YFU USA about some of their arguments at home (which are completely normal in every single family), but also about Jacky helping out at a pizzeria. Because once in a while Jacky assisted and helped out at a pizza place by cleaning the tables and seating people or answering phone calls. She did not sign any contracts, never received any pay checks for helping out, and also never affected any job opportunities for Americans by doing that.

Exactly because of these things, YFU USA wants to send her home without helping her at all. They did not even send her a warning letter, gave her a second chance, or some time to prepare - They just want to send her straight back home to Germany.

When her field director and her local representative called Jacky to talk about all these issues, she's never had any chance to explain her point of view. They did not believe anything Jacky said and accused her of being manipulative, a bad person, trying to be innocent, not caring about other people at all, etc.

Jacky knows that she has made some mistakes during her stay in the United States, but sending her home for those kind of reasons and not giving her any chance to explain, or to improve is not fair at all. Especially the fact that her mistakes are not deporting-worthy at all.

So help Jacky to stay in the US and to stand against the unfair treatment of YFU USA! Sign this petition, share it and help Jacky!