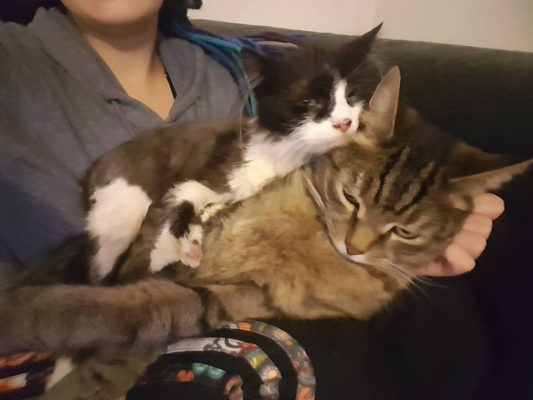 This is the story of puss puss. A beloved cat who every one knows and loves. He followed me home over seven year ago, we continued putting him out as we believed he would be someone’s pet. But he kept coming back, we then let him stay.

Puss puss is a roaming cat, he likes to visit countless people around the crossroads and all children love him. When he kept coming back we had put on facebook if he was anyones cat, one woman came and she said it wasn’t hers, with great sadness. We never seen anyone looking for him so he came to live with us. We then took on a smaller cat shown in the photos and then are like brother and sister.

So here comes the sad parts of this story. Puss puss went missing around a week ago. Countless people helped us look for him, shared our posts, and kept an eye out. The people he visits every day had not seen him. This isn’t like him at all.

Then after over 24hours, we see a facebook post with pictures that were identical to him. Stating that he was home after 5 years. Everyone who knows him and us, knows we have had him a lot longer. We got in contact and asked if we could come and see him and see if it was our puss puss. They had no hesitation, so we went, it is only around the corner! To our relief it was him, he was alive.

We left him, after seeing no proof of ownership or chipping, as we were just relieved to see he was well. Then we found out they were keeping him shut in. and for him this will be very stressful as he goes out everyday and has done for the past 7+ years.

Our family and the neighbours are very heartbroken, so is his little sister boots. We asked if she would let him out, she keeps changing her story and hasn’t been too friendly about all this. Has shown no compassion. Has told so many lies about she will let him out and still no one has seen him.

Please help us set him free. We are not disputing ownership. However, we are worried for his welfare.