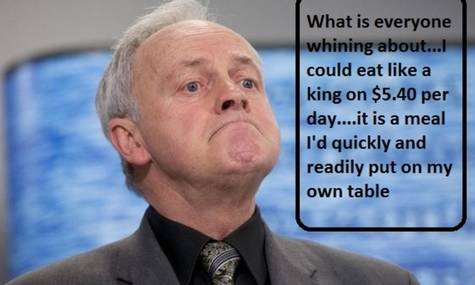 Leo Glavine would be "happy to have" Northwood's food on his table....so make him prove it!

CTV Atlantic's 6pm broadcast on August 25th 2016 featured a story about government cuts to nursing home budgets in Nova Scotia. A hot button story over the last week has been the $5.40 per day meal budget for each resident living at Northwood in Halifax. Northwood alleges that the meal budget has been effected by large cuts to nursing home budgets by the government. Meanwhile, the premier says Northwood makes it's own spending decisions and that they are running a "surplus"....said surplus is $26,000 for 2016.....however, the Liberal's budget cut to Northwood was $600,000 for 2016. Leo Glavine was quoted in a media scrum saying: "It is a meal I'd very quickly and readily put on my table" when speaking on the topic of Northwood's $5.40 per day meal budget for its residents.

A man in Mr. Glavine's position should act in a responsible, respectful & sensitive manner while representing and conducting the business of the people of Nova Scotia.