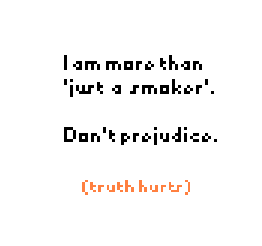 #LeftSwipeDat Campaign is Shallow and Offensive

The organization 'truth' is well-known for their anti-drug and anti-smoking advertisements and slogans.. however, this time they have gone too far. It is one thing to display lungs [of deceased smokers] covered in tar, or interview long-time smokers who have suffered irreversible health issues, but the #LeftSwipeDat campaign is a step in the wrong direction - now they promote prejudice and bigotry as a means to end smoking once and for all.

The recent ad played during the Grammy Awards shows a group of artists, mainly 'internet sensations' easily recognized by younger generations, visiting a popular matchmaking site and 'left-swiping' smokers they come across - this action essentially blocks both parties from communicating with each other.

Smokers have been discriminated against for decades, for many good reasons, but this one is terrible. This campaign is basically saying that it is okay to judge someone because of their smoking preference, regardless of what they could bring to the table in a relationship. It is both offensive and immature for this behavior to be encouraged, and could prevent a person from finding a great friend or even significant other.

Where does the line stop? Should we discriminate against peoples' religious preference? What about those who are organ donors? Or truck drivers? Definitely not, that's just silly. This isn't to say that people shouldn't have their own opinions and judgments of others, but displaying a national advertisement promoting blatant prejudice of any group is just petty and wrong.

In our petition, we ask nothing more than the #LeftSwipeDat campaign be ceased and its advertisements be pulled from television and social media websites.