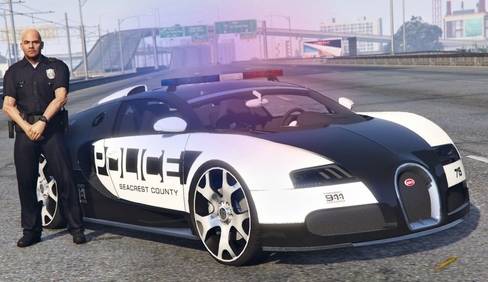 1305 people have signed this petition. Add your name now!

Just like registering as a CEO/Associate, VIP/ or President/Biker. You will be able to register as a Police Sergeant and recruit up to seven Constables.

Introducing the ability to play as Police in GTA Online is also largely requested with most attracted by the role-play and challenging aspect of catching suspects alive.

Just like ceo work there will be police work and you get to be in the swat team. Or trying to stop a CEO from do something illegal.

When you do creates you steal large shipments of like alcohol jewelry cars and fur coats several CEOs are working together to get large shipments of several containers with these items and you and a group of 7 Constables are trying to stop the CEOs.

In the DLC for Grand Theft Auto you'll be able to play as police officers and SWAT team trying to stop criminals all over the state of Los Santos and Blaine county from Major crimes like CEOs uniting to steal large crate shipments of several containers off ships and loading docks with fur coats alcohol jewelry and vehicles to make high end profits as officers and SWAT try to stop CEOs from doing illegal activity or from smaller scale jobs like bank robberies store hold-ups and car theft and house break-ins.

When you arrest an online player he is token to the nearest police stations in the state of the Los Santos and Blaine county and Paleto bay.

New feature where you stop online players cars by shot it with this mini EMP that turns their car off and electrocutes them it's in story mode.

multiplayer lobby were who join this lobby are all cops assigned to random districts. stopping crimes, pulling over AI traffic searching vehicles writing tickets etc. in this lobby we all start as rookie officers an build up are rep an get paid a daily salary according to are rank. are cellphone will now be a walkie talkie with commands to run license plates an identification. Check for warrants also to talk to each other in a foot pursuit.

Lombank robbery happens and you gotta try and stop the robbery.