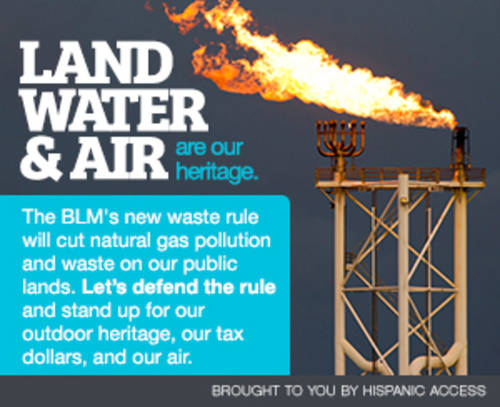 The Bureau of Land Management’s new waste rule will cut waste, clean up our air, create American jobs, and ensure a fair return to taxpayers. Currently oil and gas companies are allowing $2 billion worth of natural gas go up into the atmosphere through methane leaks and intentional releases. The BLM waste rule takes $330 million worth of gas out of that equation by requiring gas on public and tribal lands to be captured.

Industry wants this rule overturned. But the benefits to Americans are too great.

Hispanics bear a disproportionate load when it comes to health risks from toxic emissions per a report by the National Hispanic Medical Association and Clean Air Task Force. We believe it is our moral obligation to protect our cherished air, and ensure that our communities and children are not harmed by public health issues that we can knowingly prevent.

As oil and gas developments continue to expand in the western states, the BLM’s common-sense rule will help make sure energy development is done responsibly, so not only do we prevent wasting precious American energy resources, but we also make sure the health of our communities comes first.