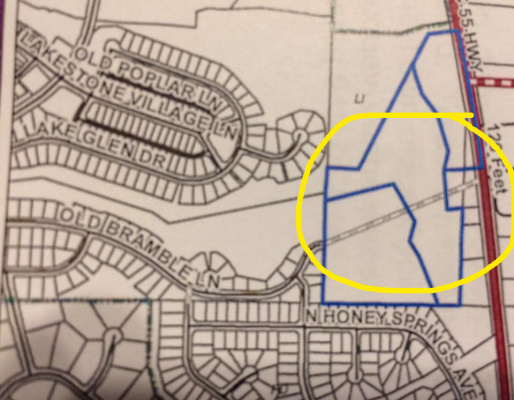 A developer is trying to enlarge a residential zone at the end of Old Bramble Lane in Phase 3 of Lakestone Village. The developer will build houses in this area and temporarily leave the end of Old Bramble stubbed for future connection to Highway 55 through commercial/industrial property. The developer hosted a neighborhood meeting on August 16th where residents were told the neighborhood road would not connect to 55. They were using these words to deceive the residents because they would not be the ones connecting it, but leaving it for future commercial properties to connect to our neighborhood.
The purpose of this petition is not to deny them the right to build homes on a residentially zoned property. The purpose is to deny their request to expand the residential zone, allowing them to stub a future access road to Highway 55.
Property owners in Lakestone were under the assumption that this road would never connect to a major highway. Five Points in Fuquay is one of the busiest intersections in the entire town. Allowing vehicles to cut through our residential streets to bypass this intersection would cause a large influx of traffic through our neighborhood by residential and commercial vehicles.
Please help by signing this petition and attending the next neighborhood and town hall meetings. We need your support to protect our beautiful neighborhood!