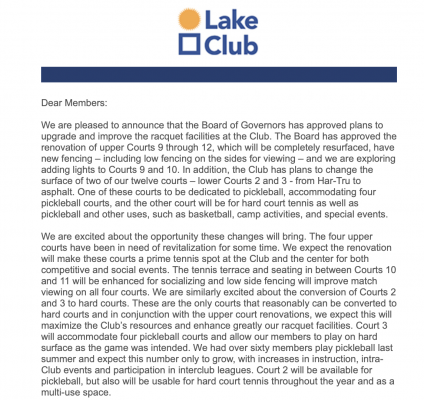 In response to the email from the Lake Club Board of Governors dated April 7, 2022 to the members of the Lake Club detailing planned changes to the court configurations and additional changes to be undertaken following Summer 2022 season.

We, the petitioning parties believe that the planned changes represent very significant modifications both in terms of use as well as cost to the club. While the proposed changes are not intended to present incremental costs to any members due to assessments - the changes are significant none-the-less and the undersigned believe that this proposal is too great for the Board to undertake without the larger input from club membership.

This petition is not a referendum on the addition of Pickleball at the Lake Club. It should be understood by all parties that Pickleball is a growing sport and it is important to improve the offering at the Lake Club to continue improving its appeal in the region for prospective members.

The undersigned to this petition hereby request that the planned changes be presented to the entire membership of Lake Club for further discussion and debate.