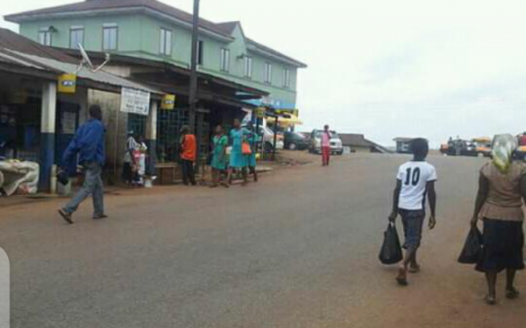 Kwahu Bepong; the birth place of Dr. JB Danquah, is lagging behind in infrastructure development.

It will interest you to know that Kwahu Bepong is among the old towns in Kwahu if not the oldest. The town occupies a land size of about 400km². The population of the town is about 12,000. The major occupation of its citizens is farming. Historically, the town is noted to be the only town that mounted a strong resistance against oppressors and criminals who tried to evade Kwahu years ago. The town has produced important personalities like Dr. JB Danquah,the doyen of Ghana's democracy, among others. The town used to host a major market center on market days at Kwahu. Sadly, the town has not seen any major development in terms of infrastructure for the past 50years. The only tarred road is the major road that links the town to Afram Plains. All the access roads in the town have been taken over by erosions making the whole town virtually unmotorable. The only bridge linking the town to one of its villages has been completed for the past four years and has since not been commissioned for use. The town has no proper healthcare facility. The only two unit block clinic in the area was constructed by the citizens 30 years ago and has since deteriorated beyond the status of a simple chips compound. Bepong has no market even though it used to host the major market center for all the villages and nearby towns in the area. It has no library and community center for its youths. The only road connecting One of its villages known as Ntomem where majority of it farming inputs such as cocoa, coffee, timber and crops like banana, plantain, cassava among others are produced, is in deplorable state to the extent that the road becomes inaccessible when it rains. Lastly, the government promised to build 1d1f in the area, unfortunately, the land that was earmark for the project has not seen a single block since the sod cutting was done three years ago. These and other issues are the very reason behind this petition. We are by this petition demanding from the authorities to fix our roads including town roads and Ntomem road, construction our drains just like they are doing in other nearby towns such as Asakraka,Tafo and Obomeng, and give us a befitting chips compound. We are again hoping to receive a rapid response from authorities on matters or issues raised in this petition, since several meetings with authorities have turned a deaf hear. Please sign and share