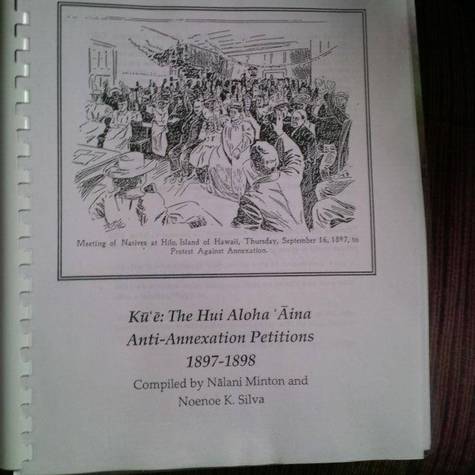 The immediate significance of the petition is to unite all Kanaka Ma'oli as desendants of the people who courageously signed their names in solidarity one hundred sixteen years ago to secure our continued existence as an independent nation forever. During that struggle, James Keauiluna Kaulia, president of Hui Aloha 'Aina, said, "Mai makau, e kupaa ma ke aloha i ka 'aina, a e lokahi ma ka manao, e kue loa aku i ka hoohui ia o Hawai'i me Amerika a hiki i ke aloha 'aina hope loa" 'Do not be afraid, be steadfast in aloha for your land and be united in thought. Protest forever the annexation of Hawai'i until the very last aloha 'aina.' In the spirit of these words we unite again to follow the lead of our kupuna. The petitions were first presented to the public on January 17, 1898 during the Sovereignty Sunday events held on the 'Iolani Palace grounds.