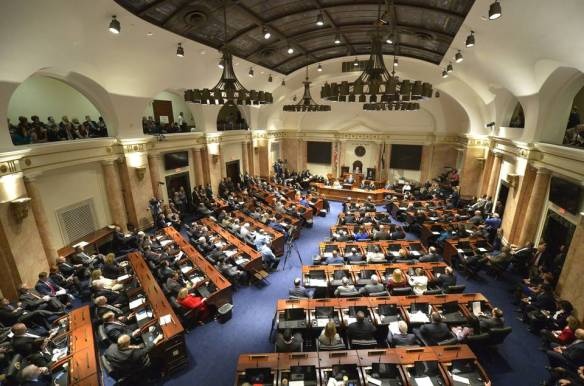 Repeal/Revise Sections of KRS Chapter 39A

Repeal/Revise Sections of KRS Chapter 39A

2.Sign the petition. We need our state representatives to know the will of the people.

KRS Chapter 39A provides the Kentucky Governor and Chief Executive Officers the possibility for abuse of power and needs to be revised to ensure we never allow dictatorial power by any one person. When KRS 39A was enacted in 1998, the citizens of Kentucky had not experienced a “Declared Emergency” that would demonstrate a dominance of power by any one person. With the present environment, the citizens of Kentucky, much like many other states, are now viewing what can happen when government officials are given broad unlimited power and authority.

State your concerns about the wording below:

Seizing property, transportation, food and clothing in 39A.100

Governor can enter into contracts of loan with no dollar limit as deemed necessary 39A.170

Peace Officers may arrest without a warrant as in 39A.190

(7) "Declared emergency" means any incident or situation declared to be an emergency by executive order of the Governor, or a county judge/executive, or a mayor, or the chief executive of other local governments in the Commonwealth pursuant to the provisions of KRS Chapters 39A to 39F;

(9) "Disaster" means any incident or situation declared as such by executive order of the Governor, or the President of the United States, pursuant to federal law;

(12) "Emergency" means any incident or situation which poses a major threat to public safety so as to cause, or threaten to cause, loss of life, serious injury, significant damage to property, or major harm to public health or the environment and which a local emergency response agency determines is beyond its capabilities;

39A.070 Powers, responsibilities, and duties of director.

(9) To take any other preparedness or response actions deemed necessary for adequate response to a disaster or emergency situation to include:

39A.100 Emergency powers of Governor and local chief executive officers.

1. All means of transportation and communication;

2. All stocks of fuel of whatever nature;

3. Food, clothing, equipment, materials, medicines, and all supplies; and

4. Facilities, including buildings and plants;

(d) To sell, lend, give, or distribute any of the property under paragraph...

(f) To exclude all nonessential, unauthorized, disruptive, or otherwise uncooperative personnel from the scene of the emergency, and to command those persons or groups assembled at the scene to disperse.....

(h) To prohibit or limit the sale or consumption of goods,...

(2)(d) To order immediate purchase or rental of, contract for, or otherwise procure, without regard to procurement codes or budget requirements,...

The Governor may make, amend, and rescind any executive orders as deemed necessary to carry out the provisions of KRS Chapters 39A to 39F.

39A.110 Compensation for property taken for temporary use -- Notice to owner of property where title taken.

39A.170 Lease or loan of real or personal property of state government -- Disaster and emergency response activities of state employees.

39A.180 Orders and administrative regulations of political subdivisions -- Enforcement.

(1) The political subdivisions of the state and other agencies designated or appointed by the Governor may make, amend, and rescind orders and promulgate administrative regulations necessary for disaster and emergency response purposes,...

39A.190 Power of arrest for violation of order or administrative regulation.

A peace officer, when in full and distinctive uniform or displaying a badge or other insignia of authority, may arrest without a warrant any person violating or attempting to violate in the officer's presence any order or administrative regulation made pursuant to this chapter, or KRS Chapter 39B, 39C, 39D, 39E, or 39F.