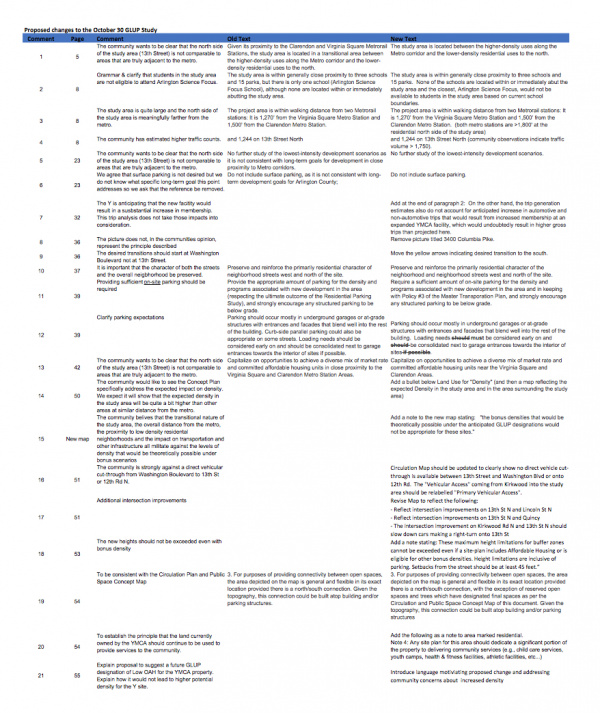 We, the undersigned, are concerned about the Washington Boulevard and Kirkwood Special GLUP Study "Plus" and Concept Plan dated October 30, 2017 and support the following neighborhood response.

We have previously voiced these concerns via a letter in April 2017 sent by members of our community to Mr. Fusarelli (attached) and then via a letter signed by over 70 residents of the community and sent to the County Board after the release of the Concept Plan. In both of these letters we made clear that while we support the County’s efforts to evaluate and improve the land use within our neighborhood, we do not feel that the voice of the community has been adequately heard in this process or that our concerns have been adequately addressed.

The purpose of this letter is to reiterate the overall concerns raised in our previous letters and to propose specific changes to the Washington Boulevard and Kirkwood Special GLUP Study “Plus” and Concept Plan dated October 30th, 2017.

The current plan must better address the concerns of the community on several dimensions.

1. The plan should better address the community’s concerns about the overall increase in density.

The GLUP Study Area borders the Rosslyn-Ballston Metro Corridor but is not part of it. The north side of the study area is not comparable to areas that are within the Corridor and truly adjacent to the Metro Stations such as Clarendon Park, Courthouse Hills, or parts of Lyon Village.

We are therefore concerned that the Concept plan would allow too great a density for the study area, establishing a new precedent for the appropriate levels of density at such a distance from the Metro. Would it be appropriate for similar levels of density (and building height) to be established throughout Lyon Village all the way to the north side of Key Boulevard? Key Boulevard is far closer to the Metro (<1,300 ft, straight line) than 13th Street (1,800+ ft). As such we are asking the County to include in the Concept Plan a map showing the impact on density, so as to be clear and transparent about any precedent this could set for appropriate density at this distance from the Metro. We further think that the plan should indicate that the bonus densities that would be theoretically possible under these GLUP designations would not be appropriate for these particular sites.

2. The plan should address the serious negative impact this development could have on traffic, parking, and pedestrian safety more clearly.

While the community supports new walkways for pedestrians and cyclists, we are strongly and unanimously against a direct vehicular connection between 12th Rd / 13th St and Washington Blvd or Kirkwood Rd. The current Concept Plan appears ambiguous on vehicular connections on these streets. As noted in our April letter, community observations indicate that traffic volumes along 13th St is already over 1,750 trips per day (not the 1,250 shown in the study). The Arlington Master Transportation Plan identifies 1,500 as the threshold for “low traffic volume” which it associates with single family development. Furthermore, we recognize that such a road and the new road between the Y and the other properties would reduce the area that could otherwise be used for development on the existing YMCA property, potentially leading to increased building heights in an area the community is most sensitive to regarding increased heights. As such, we are against any new direct vehicular connection between 12th Rd / 13th St and Washington Blvd or Kirkwood Rd and would propose that the new road to the south be placed to minimize the impact on the Y property. In addition, as another way to mitigate the impact on traffic, and in light of the Y’s stated goal of more than tripling its membership, we believe that as part of any redevelopment the primary YMCA parking entrance should not be on 13th St. N.

The community also feels that it is critical for any new development to have sufficient on-site parking and that the principles in the Concept Plan should be strengthened to emphasize this issue. Finally, given the potential overall impact, the community feels that some additional streets and intersections should be considered for improvement.

3. The plan should be changed to lower building height and ensure adequate setbacks along 13th Street N and in the areas adjacent to 12th Road N.

First, we believe it is imperative that the Concept Plan clearly state that the proposed heights should not be exceeded even with bonus density or height. In addition, while the October 30 Concept Plan is a noted and appreciated improvement on previous drafts, we believe there is still an opportunity to better utilize the topography and transitions to limit the maximum building height along 13th Street and 12th Road by shifting height towards Washington Boulevard and Kirkwood Road where there is less impact on the existing residential community. This would be consistent with the “good planning principles” that Chairman Fisette outlined at the 10/21 Board meeting on this topic.

We believe height recommendations should provide effective transitions to the community, and be appropriately sensitive to the fact that other areas as far as 13th St & 12th Rd from the Clarendon / Wilson / Fairfax metro corridor are almost exclusively zoned for single family homes and townhomes. While we recognize that there are areas of Arlington where single family homes are located in extremely close proximity to larger development they are all far closer to the main metro line corridor and the properties there were often developed after the larger development.[1]

We also recognize that the building height for single family homes can be larger than the 35 feet proposed. Height, however, is not the only concern. Single family home zoning also includes specific setbacks and lot coverage requirements that minimize the overall impact on the character of a residential street, even if the height is above 35 feet. A multi-residential building above 35 feet, without the setbacks and lot coverage requirements, has a much larger impact on the availability of sunlight and on the character of a street. Already, the changes proposed by the GLUP will impact the characteristics of our current neighborhood, so we ask that height limits be limited, clear and specific for any new uses being considered.

4. The plan must ensure that the services provided by the YMCA will continue and be enhanced by this development.

In the same way that the YMCA originally received permission to build its current facility on R5 land based in part on consideration of the services it undertook to provide (thereby reducing the pressure on the County to provide these services itself), we believe granting their current request to change the GLUP to allow for zoning other than Semi-Public / R5 is only appropriate if it will further enhance these services.

We applaud the YMCA’s announced intention to enhance the services it provides to the community. However, we believe that the Concept Plan should include explicit language that the land continues to be used to provide similar services in the future. Therefore, we believe that the proposed changes should include a note in the Concept Plan that requires the current and future owners of the area currently owned by the YMCA (whether that be the YMCA or other party) to continue providing services to the community to partially compensate for the increase in density they are requesting.

To address these four issues, we are proposing several specific changes to the updated Washington Boulevard and Kirkwood Special GLUP Study “Plus” and Concept Plan dated October 30th, 2017. Our specific changes are outlined in the Appendices below.

[1] For example, the area on N Adams Street behind the new Hyatt has frequently been used as an example where single family homes are adjacent to larger development. Those properties are less than a block from Wilson Boulevard and were developed at the same time as the Hyatt. They are an extremely poor corollary for the new development along 13th Street which already has existing residential structures.