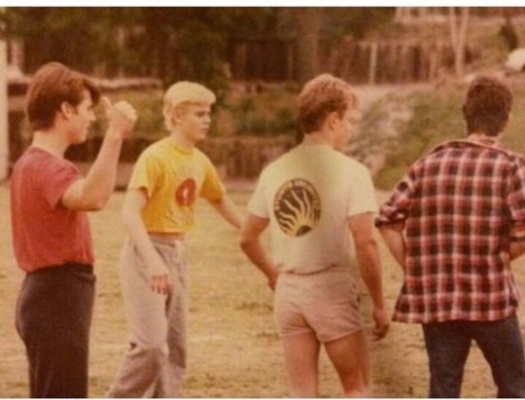 A request to see more unreleased footage from The Outsiders

If it was not obvious enough, The Outsiders is a classic book/movie that has inspired young adults for decades. The Outsiders fandom is still rather large on social media today, and new people join it every single year after reading the book in school. Of course, in 2005, we were given The Outsiders: The Complete Novel with more scenes added to the original film, as well as a few clips of behind the scenes footage. However, there still must be more footage that we have not seen. For example, recently someone posted a short clip of a blooper in The Outsiders movie, where after Matt Dillon falls off the chair, he sits back down, and C. Thomas Howell calls him a clown. Also, Francis Ford Coppola mentioned that he recorded the rehearsals of The Outsiders too (which we did get to see a few short seconds of in the Complete Novel version). Bloopers, outtakes, the soccer game between the greasers and the socs— and probably so many other unknown gems that we do not have access to. On behalf of the entire fandom of The Outsiders, I am requesting that this footage is released to us— whether it is uploaded to Youtube or on sold on D.V.D. Ever since The Outsiders House museum project has went into action, we have been seeing many new photos of the cast. If there are this many photos that are being dug up after 35 years, there has to be footage that exists out there somewhere. Let's continue to keep this story and movie alive.