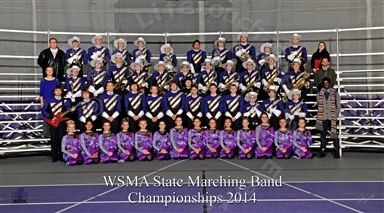 As you may all know, there's been talk that the Cudahy band is planning to get rid of the competitive part of marching band. A tradition that's been going on in our band for years! Well, a ton of people are very upset about this. People who aren't even in band are awestruck from this information. The Cudahy marching band is adored by many high school bands all around the state. They love to see us perform. We get to show them what our small band can do. But lets be realistic, the Cudahy band is not that small. South Milwaukee marched with less than half the people we have last year. Saying that we have to quit competing because of low numbers is outrageous. The girls swim team last year only had nine people and they were going against schools of 30 girls, yet their placement was great. Saying that was have to quit competing for marching band is basically giving up on us, telling us just because we're small we can't get high placements. Why is it ok for sports to have a small amount of members but not band? Cudahy high school marching band in 2013 got 3rd place at state! You want to give up on that?

But the cost might be a problem. If you love something, you should not let it go. If you really loved it, you would find ways to get the money for it, right? There are plenty of things that we can do to get the money we need. But of course we need the help of the director to do some of that stuff. If we get the band together during the summer we could march in parade, we get paid for that! Hey, band bonding, a musical experience and money for our band! What a great deal! There's also the little things we can do like fundraisers. Bake sales for starters. A couple of families can make one or more treats to sell and the profit goes to the band bank. Fan tee-shirts and selling chocolate bars, you can always make a profit from that. Other school do all this stuff to keep competing and we can too. Cost is not a problem if we find ways to raise money.
Competitive marching band is very beneficial to students. It helps you gain confidence, coordination, organizing skills, friends and a lifelong and musical experience. Think about it, you're playing in front of hundreds of people with a family you love. It helps boost your confidence. Scores help you do better and it pushes us to do our best. Feedback helps us improve and we take a lot of that information with us to the real world. "Look up, play loud, be proud." It helps future musicians get a wider range of music playing. It teaches you discipline, respect and teamwork skills. You're learning to memorize and play four pages worth of music, over 60 drills to march, visuals, and not talking an eye off the drum major. The pride we get when we do well when bring home that trophy is like no other. Our band room is filled with our accomplishments! Yes we might be upset one week that we took a lower placement but that just makes us strive harder to get a better placement the next week. Every time I walk past that band trophy case in the lobby at school, I get that sense of pride that I don't want to lose.
One last thing... Taking away competing in band is a real downer. Think about it this way. If you were on the basketball team, all you would do is practice and not play any games. What's the point? You can't show off your team skills and something that you love. Our band would lose a lot more people coming in and former if we take away competing in marching band. You would take away most of our band bonding and being able to met other people with the same interest as you at different schools. Competing is something all kids in band love. Some don't say it all the time and some may get mad from time to time but I've heard them all talk and they truly love band and competing. There may be a low percentage of high school that compete but why do we have to follow them? That's what makes Cudahy's band unique.
Shouldn't the kids have a say in this at all? There are ways we can help. Keep the tradition going, long and proud.