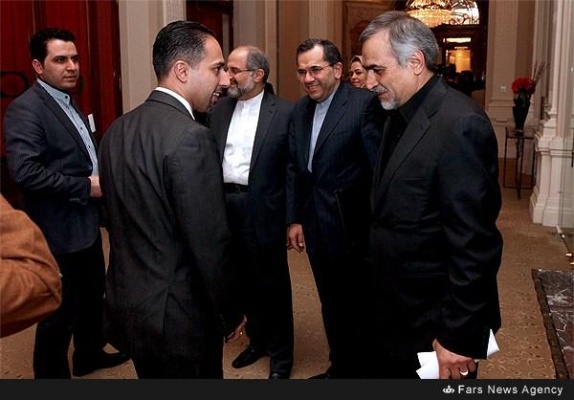 To Keep Trita Parsi Out Of Harvard

Trita Parsi in conversations with the Iranian regime’snegotiating team in Austria.

Your institution has planned a lecture by Mr. Trita Parsi titled: “Biden, Iran and the Nuclear Issue - Can the US-Iran Enmity be Buried?”

The people of Iran are in the second month of a national uprising against the tyrannical religious government. At this point peaceful demonstrations are brutally suppressed and hundreds of people mostly young and many women have been killed. Thousands have been injured, and tens of thousands have been imprisoned. In this historic moment, your university is hosting an individual who to a large majority of Iranians inside and outside Iran is known as a friend, advocate and lobbyist of the Iranian regime in the US.

Trita Parsi and NIAC, the organization that he founded and led until a few years ago, under the disguise of nonaggression, had close relations with the authorities of the Iranian regime. Mr. Parsi and NIAC openly and secretly cooperated with Iranian regime for nearly twenty years in a concerted effort to reduce pressure on Tehran. The distorted (and glorified) image of Iranian regime presented by Mr. Parsi, accompanied by political solutions he advocated in Washington, skewed the American policy on Iran for years, extending the life of the dictatorship, and suffering and pain of the Iranian people.

Dr. Parsi (under the false pretense of speaking for the Iranian people) was influential In President Obama’s silence during the 2009 uprising of the people of Iran. Recently both former President Obama and former Secretary of State Hillary Clinton have expressed their regret for their silence.

The people of Iran are asking the world to be their voice. At the same time Harvard is offering a platform to the person echoing the voice of brutal dictators in Iran.

President Bacow: This is not an academic exercise. Your university would have not offered Hitler’s ambassador to the US, or Apartheid South Africa’s ambassador a platform. To the Iranian people this is no different. Giving a platform to Dr. Parsi is an insult to the people of Iran and all those in the US that care for human rights.

We respectfully request that you retract your invitation To Mr. Trita Parsi to give a talk at Harvard.

Note: This letter and the name of those signing it will be openly published.