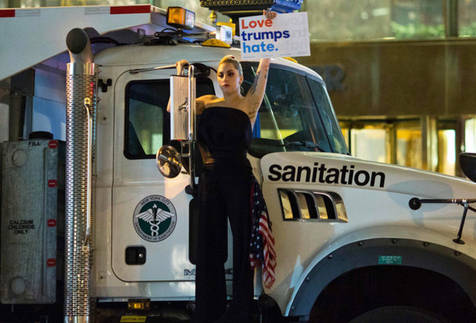 1313 people have signed this petition. Add your name now!

Lady Gaga is the performer for the 2017 Superbowl Pepsi Half-Time Show. Her personal beliefs about Donald Trump, President elect are part of the protesting and riot problem since the election results. She is acting more like a ring leader for chaos than a celebrity. She joined the protests stood on a garbage truck and held up the "Love Trumps Hate" sign in front of the Trump Tower, then sat in her car sobbing. Her moody behavior is historically questionable. She is avidly creating fear online. She openly insulted the future first lady online.

She has now avidly promoting an online petition for the electoral college to make Hillary Clinton president on December 19th. It appears she is creating her own revolution in the USA. Her behavior of a spoiled child that didn't get their own way is absurd. Donald Trump won this election fair and square.

These liberal actions are a hateful expression of opinion. Lady Gaga is creating the very haters she screams about. Most everyone protesting and starting riots is in that "Lady Gaga" fan club age range. Her Twitter has over 20 million fans and she is officially attempting to create more havoc. Her Facebook has over 61 million likes. It's time we show these celebrities they cannot control our democracy.

We feel a Superbowl performance by Stefani Joanne Angelina Germanotta (Lady Gaga) will further create division in our country as we try to heal. Due to her past behaviors and odd performances we do not know what she is capable of. She appears to be a threat to the democracy in the USA. We are requesting that Pepsi and the NFL officially denounce Lady Gaga from performing at the 2017 Superbowl.