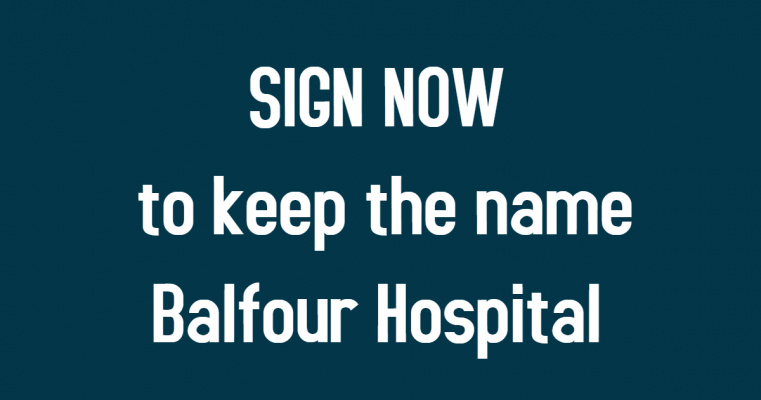 747 people have signed this petition. Add your name now!

Do people realise that NHS Orkney are looking to give the new hospital a different name? They are running a stall at the County Show which showcases the new build and are - in very small print - inviting visitors to "suggest a name for the new hospital and healthcare facility"!

The name Balfour Hospital survived the move in 1926 from where it was originally founded in what is now the West End Hotel to the present day site. It has I believe become more than just the name for the building - it is the name of the institution at the centre of Orkney healthcare and to Orkney "The Balfour" is where we go when we are injured or ill.

As a member of the public I feel very strongly that to throw this name away without at least advertising the fact and allowing the ordinary people of Orkney to have their say would be very unfortunate, I think anyone who feels that the name of The Balfour Hospital should be kept needs to let their feelings be known now before we lose it.

Sign the petition here or at Jude's Fabric and Joke Shop in the Anchor Buildings on Bridge Street. Alternatively you could contact NHS Orkney directly or if you are at the County Show on Saturday, pop up to the NHS Stall and insert Balfour Hospital into the suggestion box.