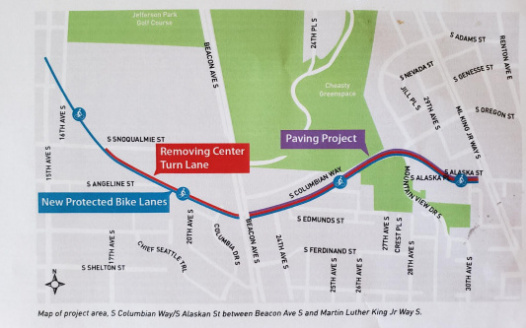 South Columbian Way has become increasingly more congested with vehicular traffic as hundreds of new housing units have been added. Extensive further development in Columbia City and the Rainier Valley is on the horizon, promising to exacerbate congestion. As the peak commuting hours expand, the lines of backed up vehicles waiting at the major intersections have grown longer. The congestion is getting worse, and it will become more problematic if SDOT follows through with a proposed change to the S. Columbian Way right-of-way.

S Columbian Way is one of the few major transportation conduits for commercial and private vehicles accessing I-5 from South Seattle. It is how many residents access their neighborhood streets. Additionally, there are private driveways that serve as the only access to several homes along Columbian Way.

As part of the S Columbian Way/Alaska St. Paving Project, the existing center turn lane will be eliminated between MLK Way S. and S. Snoqualmie St. This proposal is being implemented under the citywide Bicycle Master Plan in order to add 5-foot buffers to the existing bike lanes on both the north and south side of S. Columbian Way.

The 2013 SEPA checklist for the Bicycle Master Plan indicates that "part of the analysis of many projects will include analysis of traffic operations to determine whether congestion would be increased by implementation of the project." The SEPA review also claims that "the BMP seeks to improve transportation conditions within Seattle".

Since the public meeting in October 2016, when SDOT presented two options for changes to the S. Columbian Way right-of-way (both of which eliminated the center turn lane) the increase in the number of vehicular trips has far exceeded the increase in bicycle ridership.

Eliminating the center turn lane will increase traffic congestion along a route already suffering from excessive congestion. Vehicles needing to turn left to access streets and private driveways off Columbian will back up vehicles behind them, adding a new cause for congestion. This could result in a safety issue for pedestrians and cyclists as drivers use higher speeds to "shoot the gap" in order to make the left turn quickly. Driver frustrations may also cause some drivers to pass cars that are waiting to turn on the right which will be in the proposed bicycle lane and buffer.

Revising the existing lane striping on S. Columbian Way will increase traffic congestion and pose new safety threats to pedestrians and cyclists. We are petitioning for keeping the center turn lane along S Columbian Way to avoid unnecessary traffic issues in the future.