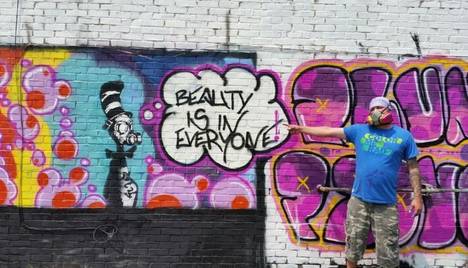 Keep the art in Plum

A wall that I painted is being covered up due to one person complaining to the township. A little back story on this. Previously the wall had spray painted on it "F**k Gay Bitches" on it. I approached the owner, who gave me the permission to paint the wall and cover it up. Now, well over a year later due to one woman complaining about it, the township has to have it covered up. This is considered "graffiti" due to it being painted on the wall of an established business.

The fact is, this isn't graffiti. This was a permissioned piece to cover up the vulgar and offensive language. While this was being painted, I had multiple people, including police officers watching me and asking me about my art. Parents in community were also stopping me saying "Thank you" for adding some bright colors to the community. Is this the best piece out there? No, it's not. This represents something we all have, and that's beauty in all of us. The purpose of the Cat in the Hat and gas mask is to preserve the innocence of the youth in us, and the youth now. There's so much ugly in the world that we need to keep the kid in all of us alive, and realize there's still good out there.

If you're reading this, I ask you to really think about the message that was on the building before the painting, and what is on there now. Look away from the paint, and look at the message.