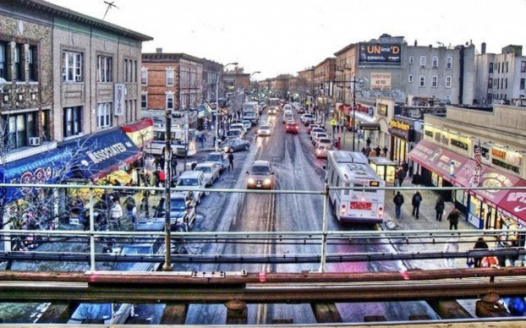 A local business owner and members of Community Board 5 expressed concerns about a proposed plan to bring a bus lane to Fresh Pond Road in Ridgewood during the advisory body’s Wednesday meeting in Middle Village.
“It’s going to kill businesses,” said Giuseppe Palmeri, the owner of Gemelli Jewelers. “Fresh Pond Road will become a ghost town.”


The plan, in its current stage, creates a bus lane on the southbound side of Fresh Pond Road between Metropolitan and Putnam Avenues during the peak ridership hours of 2 to 8 p.m.

The proposed plan was presented to Community Board 5 by Jason Banrey, DOT Queens deputy borough commissioner, Kyle Gebhart, DOT project manager of transit development and Matt Kroll, a representative of the MTA. They indicated that the plans will be altered based on community feedback.
While several board members shared concerns about parking, the impact on traffic and the overall effectiveness of the plan, Palmeri — the sole local business owner in attendance — was most worried for his fellow business owners and their customers.
“All the business owners agree that it’s going to be detrimental to our businesses,” Palmeri said.

Shoppers will have trouble finding parking, Palmeri charged, and, as a result, fewer people will patronize the business along Fresh Pond Road. Any decrease in the number of customers local shops get could be disastrous, he said.
“It’s not like anybody is making a killing,” Palmeri told QNS.
Banrey, Gebhart and Kroll did not directly address Palmeri’s concerns but mentioned that while 70 parking spots will be affected, 61 metered parking spots would be added around Fresh Pond Road during peak hours.
“Parking is at a premium here and that’s something we want to be sensitive to,” Banrey said.
The DOT conceived the plan after studies showed that buses along Fresh Pond Road travel at an average of 3 mph. The average human walks faster.

Additionally, several bus routes converge in the area and cause congestion, which affects all traffic.
Banrey explained that the plan would increase bus speeds by about 22 percent, but Richard Huber, a board member, was not impressed.
“That’s going from 4 mph to 5 mph,” Huber said.
Huber added that while the plan aims to increase bus speeds, it doesn’t address an increase in traffic speeds overall.
“We didn’t talk about the increase of speed with cars,” said Huber.
Banrey mentioned that the plan would end up helping traffic.
“We’re adding another lane that’s dedicated to buses and right turns,” Banrey said. ” So, we’re moving traffic here.”
Banrey and his team said they’ll make alterations to their plan and present a new one at the board’s Transportation Committee meeting on Tuesday, June 18.
Palmeri worries that despite the DOT’s listening tour, the complaints of business owners like him won’t make a difference.
“We really have no power,” he said.

Please sign this petition and help Ridgewood keep its businesses from having no choice but to close their doors.
Homeowners on side streets will lose parking and have to worry about cars blocking their driveways, tenants will come home from work and will have to drive around for hours looking for parking and patrons coming to this community will get so frustrated with no where to park that they will not come back.
This is our neighborhood and we all live, work, patronize and visit but with a bus lane there will be no way to do that anymore!!!
Please sign and share with everyone this will affect.