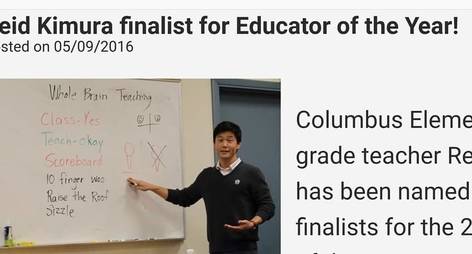 We the undersigned citizens of the United States ask that the decision to transfer Reid Kimura be overturned based on his significant influence among the students, families, peers and the community.

The purpose of this letter is to voice the concerns of parents, students, faculty and the community. It is our hope that our voices will be heard and considered for this critical situation. On June 7, 2017 parents received notice that Mr. Kimura from Columbus Elementary School located in McMinnville Oregon is being involuntarily transferred to another school in Lafayette Oregon despite the fact he has seniority over his peers. We have received no explanation as to the selection process or reasoning why Mr. Kimura was chosen. The news has created waves of shock and grief throughout the many sectors of the community that Mr. Kimura influences.

He is a very well respected teacher with a reputation that far extends the boundaries of his classroom. Voted as one of the finalists for educator of the year “Reid Kimura was recognized for his innovative teaching and “whole brain” teaching style, for inspiring creativity and enthusiasm in the class room, demonstrating exemplary teaching methods and style: and having a significant impact on student’s parents and their peers. The nomination also cited Kimura’s dedication outside the classroom raising funds to send students on field trips including a Broadway play, ifly adventure” (msdK12, 2016),. This year children enjoyed many new adventures such as Portland Jet boats where they learned about bridges, also trips to hockey games, basketball games, baseball games, the bistro mansion where they learned about table etiquette and manners while exploring new foods. The kids learned about aerodynamics building rockets, going to ifly and ziplining. Students learned about a variety of bugs, their anatomy, environments & physical characteristics, and held a museum that students around the school could learn from using physical habitat models, sculptures and PowerPoint presentations. Reid Kimura has taken the time to create many groups that otherwise some children could not afford such as; baseball, film club, and running groups. The children apply what they learn through these activities such as life skills, aerodynamics, bug museums, Christmas programs, dance contests, video production, physical education, and team building skills. While on his free time he is still heavily invested in serve projects at the Soup Kitchen in McMinnville and invites students and their families to volleyball games coached by his father at a nearby college and spends time investing in children’s lives outside his class volunteering for activities like outdoor school.

Parent’s students and the community are devastated by the news of this transfer and fear the significant long term impact it will have on students, families, faculty and the community. The students have expressed intense emotion because the current first graders that would be moving with him into second grade will no longer have the opportunities they were looking forward to and being equipped for the next level. Some have expressed that Mr. Kimura has created a safe environment for learning and feel security in being able to touch base with him even if they are not students in his class. They know that having him on campus gives them a safe person to talk to for guidance, help, or to just reassure them that someone believes in their potential. Outside of Reid Kimora’s classroom, fundraising and volunteer activities he is a leader that is reproducing himself within the Columbus school. He has strong roots here and an established reputation with strong resources for fundraising and outreach. He has been mentoring other staff members and teaching them how to be forward thinking and innovative by being an example and teaching them how to fundraise. It makes no sense to send out our strongest leader that is currently having a significant impact in this community which is his home town. He has resources, connections, and relationships that are established and enable him to do this work that shows his passion for education.

To uproot such a strong leader from this community would hinder not only his effectiveness having to start over but would rob other educators from the strong forward thinking leadership style that he has and the staff are expressing concern. This creates an even more unstable climate for our children. We thank you for your time and consideration and ask for you to take a stand to reverse this decision on behalf of the parents, children, staff and community.