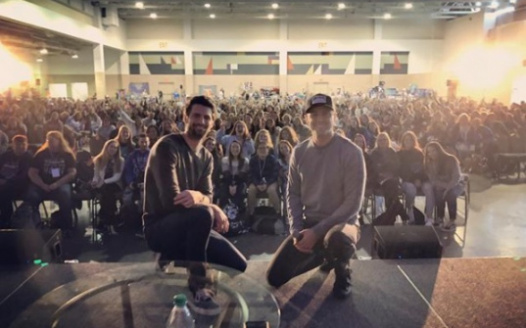 A few years ago, a petition was started to convince Eyecon Reunion Conventions that One Tree Hill fans wanted a convention in the United States. Fast forward and Eyecon is hosting their TENTH and FINAL One Tree Hill convention in Wilmington, North Carolina this March. Eyecon has made literally thousands of One Tree Hill fans' dreams come true over the last 4 years, my own included. Not only have the fans loved meeting the cast and being in the city where the show was filmed, but the cast has loved coming to the events. I've seen, first hand, how much these conventions mean to One Tree Hill fans. They proved that by getting over 1,000 signatures within a few weeks for the first round. I've seen their faces after meeting their favorite cast member. I've heard the laughter and excitement as the cast answers their questions during Q&A panels. I've seen them dressed in their One Tree Hill merchandise as they walk the streets of "Tree Hill."

I've also seen how sad fans are that Eyecon has decided to end the event, especially those who haven't been able to make it to a convention yet. So, I'm starting this new petition to prove the love and loyalty of One Tree Hill fans once again. Let's show Eyecon how much we love and appreciate everything they've done for us and that we don't want their One Tree Hill conventions to end! Please sign and share this petition if you are a fan of One Tree Hill and Eyecon's conventions and you don't want to see these shows come to an end.