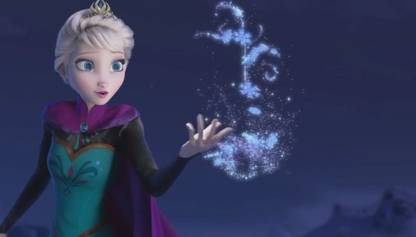 Frozen taught kids and adults alike that life doesn't just revolve around romance, and that people don't need romantic love to succeed. Of course Merida was the first single princess, but I don't think I'm wrong in saying the Frozen franchise is more popular.

In the film, Anna, being alone all her life, dreams of finding "true love". But by the end of the film, she finds that love that comes from self sacrifice is stronger than any curse. Of course she has help from Kristoff in the movie, but the film wasn't all about their love story. Besides, it wasn't his act of true love that broke the curse, she did that on her own with pure sacrifice and girl power. And I think what she realizes that make Frozen so great is that family is what really counts in the end.

Elsa, on the other hand, shows no interest in a romantic relationship, has no love interest, but is probably considered the most popular Disney princess among kids today. And why is that? Because she's strong, independent, but at the same time, not so independent that she has to cut off ties from her family(at least at the end). And at the close of Frozen, we see Elsa content with just having her sister, friends, and faithful subjects surrounding her.

I feel like giving Elsa a girlfriend would go against this idea of not needing to be in a romantic relationship to be happy. That's an important lesson for all ages, and I think in society, we feel pressured to be in a relationship. It makes sense, I mean we are constantly exposed to people on TV, in movies, in schools, at work, etc. having relationships that are "goals". So does that mean we can't be happy like them? Can't Elsa just be happy with her wonderful friends and family? Because that's what people really need in this generation: people (and more importantly children) need to understand that having a romantic relationship of any kind isn't what you need to be happy and to have a happy ending. Elsa became a perfect role model for people who are single, which for the target audience (kids), is pretty much everyone.

Frozen left viewers on a high note, and I don't think it's necessary to create another film just to throw out a controversial message that I might add that negates the purpose of the first film (you don't need a man...but you do need a woman). I get what #giveelsaagirlfriend supporters are trying to do, but I think they'd be better of creating new characters for that purpose. I mean I have respect for their opinions, and I have no hate for them, but do they have to push it on kids by using their favorite princess?

A lot of supporters of the hashtag interpret "Let it Go" as a metaphor for coming out and self acceptance. But I don't think that LGBT people are the only ones who struggle with self acceptance, and I think it can be seen as self acceptance in general. People feel self conscious about their looks, size, religion, political views, culture, and even not having a boyfriend/girlfriend. I think it's important that people who aren't LGBT to also be able to relate to "Let It Go" and Elsa and interpret it as that individual chooses. I don't think because many people see it as a metaphor for coming out that it has to be set in stone that Elsa is a lesbian.

Elsa doesn't need a man to live "happily ever after"

She doesn't need a woman to live "happily ever after" either