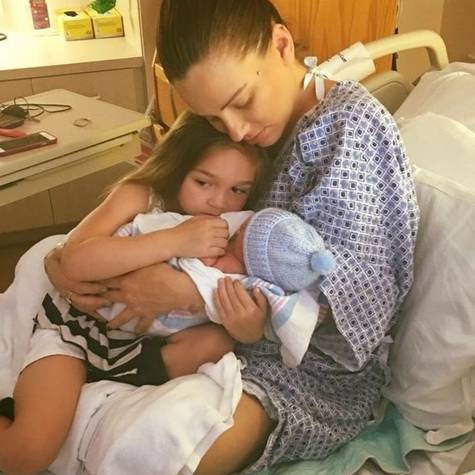 386 people have signed this petition. Add your name now!

This petition is to keep baby Julian in NY with his mommy and siblings. Julian James was born on March 11th, 2016 after what seemed like the most complicated pregnancy. Julian tried to make his arrival several times very early and Renada was taken out of work and placed on full bed rest and did all she could in her power to keep him growing and safe inside her belly. After a LONG painful and complicated delivery, after Renada's placenta ruptured, baby Julian was born almost 4 weeks early with a complete knot in his cord. After all of the odds against him, there he was ; a beautiful and healthy 6lb baby boy. Sadly, Renada and Jason's relationship didn't work out, Jason asked Renada and the kids to leave and move out of the home they shared. Jason is an ambitious man, but his work requires that he travel constantly, and keep irregular hours. Renada has been the sole caregiver since birth. Renada became a stay at home mom (after working full time since she was 16 years old) as per Jason's request. When Jason told Renada to leave the home they shared in Florida, she had no money saved, her car was repossessed and she had no where to go. Essentially, she was homeless in Florida with 3 children. After reconciliation proved to be impossible, Renada decided she had no choice but to leave as he had asked and go back to her home in NY. To go where she would have the support system of family she needed to get back on her feet. Now that we're back in NY Renada will be continuing her education to obtain a medical degree. The children are so much happier here and have adjusted so well. Being surrounded by loving family and friends have eased this transition greatly.

Now, here's the problem ; After all this time, Jason now wants Julian back in FL and in order to make that happen, Renada would once aain have to uproot the kids, remove them from a loving and stable environment and return to Florida without anywhere to go. Renada doesn't want to stop Jason from seeing Julian, and wants him to be an active part of his life. Jason has the financial means to travel to NY and visit frequently until Julian is old enough to travel to Florida for visits with daddy. Please take the time to sign this petition to keep baby Julian in NY with his mommy and siblings. Also, please know that in no way is Renada trying to keep Julian away from Jason. She has kept ALL lines of communication open, including telling Jason when the custody court date was as he had no intentions on being there. Renada wants Jason to be a part of Julians life, however for Renada to continue to raise Julian and to give him the best life possible, she has to be in NY where she has the love and support of family and friends. Renada has never put anything before Julian and his siblings. She wants them to be happy, loved and cared for in a stable, loving and structured environment.

Making us go back to Florida with no where to live, nobody to help with the children while Renada works and no sense of family or normalcy would not be in the children's best interest. To once again uproot us from a now happy and normal life, after Renada fought so hard to get them out of a bad situation, would be drastically detrimental to the well being of the children. Every child needs both parents, however when one parent has to fight for the other parent to be involved, the sole caregiver should be able to do whatever it takes to provide the best life for the child ; and, in this case, in order to do that we must remain in New York.