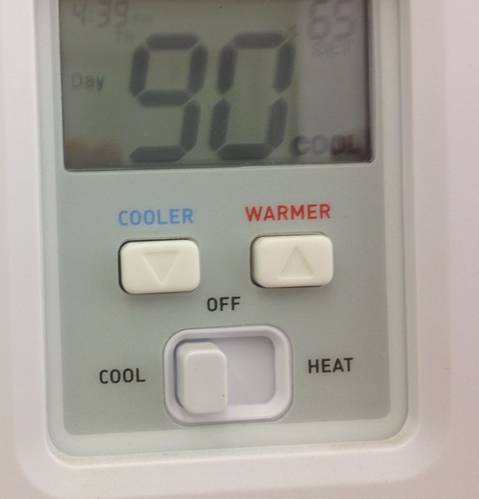 We are students and parents at Master Schreiber's ATA Martial Arts. For as long as we have been coming here, the air conditioning unit has not functioned properly. On many summer days, it is uncomfortably hot in the school both for spectators and students. Sometimes it is actually cooler outside than in the school, and classes are conducted on the asphalt in the parking lot.

We are aware that the management of the building claims the problem is our "specific use and occupancy during the periods of unusual temperature spikes." The reality is different: on hot days the unit does not cool the facility at all - even when the school is empty and classes have not yet begun. And there is nothing "unusual" about the hot days when this occurs - they are a regular feature of Martinez summers.

(The photo on this page shows the thermostat when the unit was set hours earlier to cool to 65 degrees. The temperature in the room was 90 degrees, even though class had just begun, and the class consisted of only six children between the ages of 3 and 6.)

We are also aware of the many efforts Senior Master Schreiber has made during the last 8 years to resolve this problem, including (but not limited to) the following:

We know that Master Schreiber has a service contract with an HVAC company selected by the building's management, and that management recently sent Master Schreiber an email stating that this HVAC company "has confirmed that the unit is in good shape and the mechanism is appropriate for the size and location of the space. This issue seems to be whether we can find a cost effective solution to accommodate your specific use and occupancy during the periods of unusual temperature spikes."

We also know that the following day, Master Schreiber spoke to the president of the HVAC company, who told him the following:

If this problem were only occurring at times when 30 or more people were doing vigorous physical exercise, it might be reasonable to assert that the "specific use" of the building by our martial arts school is the reason the unit is not sufficient. But the truth is that the unit fails to cool the building even when it is empty and the lights are off, and even when there are five 4-year-olds sitting still on the mat discussing their goals and trying not to cry due to discomfort.

Because we are aware of Master Schreiber's efforts and of the failure of the owners and their management company to resolve this problem, we will hold the owners and management liable for any harm that comes to us or our children due to this heat in the school. We urge the owners to install a functioning unit immediately.