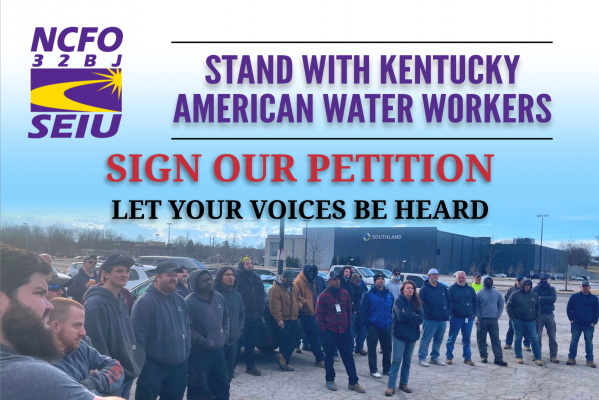 
Over the past four months, members of the National Conference of Firemen & Oilers, SEIU 32BJ, have attempted to reach a fair and equitable contract with Kentucky American Water Company. NCFO-KY American Water Company employees provide one of the most essential services to the Lexington, Fayette County area. The employees (many of which are your constituents) have proudly serviced this community throughout some of the most trying times. Now, it’s the community’s opportunity to stand behind the men and women that have always provided consistently reliable service.

Erik Mosby has been a Fayette County resident for over forty-one years, working as a KY American Water employee for nearly nineteen years, shares his concern, “Customers are the heart of everything we do because of me and my coworker’s commitment to our community. We get the job done and safely provide the service and now we are asking that we don’t fall behind the curve and have our wages mean less tomorrow than they are today. We deserve to keep up….”

Over the past five years, KY American Water Company has enjoyed a 51% increase in profits. Its shareholders have realized a 61% increase in their dividends. The hardworking men and women who are behind that economic growth deserve to benefit from the success they helped create. Yet even though the Union has consistently demonstrated a willingness to work with the Company to obtain a fair contract for everyone, the Company is not bargaining with that same good faith. Instead, the Company has tried to directly deal with the bargaining unit in order to bypass the Union and has even implied that workers could be terminated if a lawful work stoppage does occur. The Company has also engaged in unlawful surveillance and interrogation of our members’ union activities.

James Kinder, NCFO member and ten-year employee of KY American Water, shared his experience with the Company:“My coworkers and I have been surveilled, interrogated, and they even sent a threatening letter to us in January reminding us, if we planned to strike, they could decide to take away our health coverage – the healthcare of our families. They even alluded that if we plan to strike, we should return employee badges and uniforms – which sure sounds like termination to us. All we’re asking is for the company to bargain in good faith.”

The Union has filed unfair labor practice charges to address this conduct, and we will continue to protest any violation of our members’ rights. We are requesting your support in strongly urging KY American Water Company to come to the table with proposals that meets the needs of their workers.

I’m eagerly anticipating your support, not only for the employees, but for the community you represent.