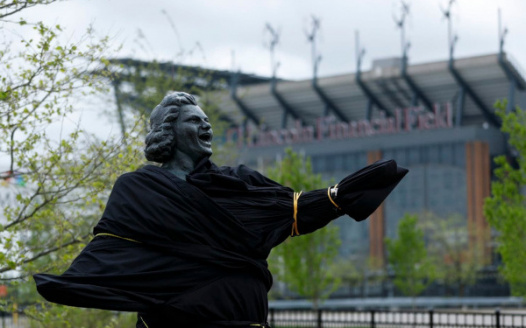 DUE TO THE OVERWHELMING SUPPORT OF THE PETITION WE HAVE INCREASED THE GOAL TO 3,000 SIGNATURES! Thank you for the support, let's keep going!

This is a public plea to BRING THE KATE SMITH STATUE TO WILDWOOD, NJ created by American Legion Post 184.

"God Bless America" is the most patriotic song in our county. It has become the song for the American people and for our veterans. In 1918 during WWI, Irving Berlin wrote the song while on the US Army base Camp Upton. The song was revised in the lead up to WWII in 1938 and later recorded by Kate Smith. The song was introduced by Kate Smith on her radio show during an Armistice Day broadcast that year from the World's Fair. From then forward, Smith's rendition consistently played around the country, from rallies to sporting events. It has been played ever since WWI in every war and conflict.

Amidst the controversy surrounding Kate Smith's past, Wildwood, NJ mayor Ernie Troiano Jr was asked if he will discontinue playing her version of "God Bless America" each morning on the Wildwood boardwalk. He firmly said the song would stay, as a symbol of patriotism and support for veterans. American Legion Post 184 supports his decision 100%, and we are proud to be residents in a town where the Mayor has integrity and endless support for veterans.

The removal of the statue is an attack on veterans who fought for this country. Without the veterans of this country, the American people would not know the freedoms they have today. Kate Smith traveled over 500,000 miles in her lifetime to perform for the troops. To us, she is Miss Patriotism.

NOW FOR OUR PLEA: Since the removal of the statue, tens of thousands of comments have been posted to social media disagreeing with the decision of the Philadelphia Flyers.

Veterans in Wildwood support the Mayor's plea to move the statue and have created this petition to show the statue's owners just how much we care.

If you agree the Kate Smith statue should have a new, loving home in Wildwood, NJ SIGN THIS PETITION AND SHARE IT WITH YOUR FRIENDS!