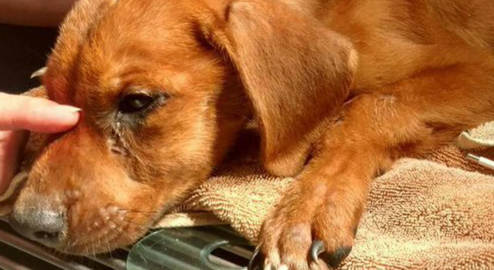 In August 2016, strangers from around the world pulled together in the hopes of saving a 3 month old puppy named Caleb found critically hurt and emaciated in Atlanta, GA. He died three days later at the emergency vet hospital. The truth of what really happened to him is shrouded in mystery but what we do know is that society let him down and instead of a happy playful life that he should have had--he was neglected by us as a society, as he was starved, and ate rocks and sticks to survive. His little body, impacted with debris caused him excruciating pain as seen in this video shortly after he was found after someone tossed him over a fence like garbage,

We the undersigned, request that Fulton County and City of Atlanta officials allow our group to place a bench or some type of memorial, with money from a fundraiser, in one of the common areas of the county such as a public park, dog park, public building yard, etc. The bench will be inscribed with an image of Caleb and a sentence or two to remind the public of the importance of society as a whole in its responsibility to care for all living beings and that the protection of animals is a mandatory, humane function.

All the money to purchase the memorial bench will be from donors who have been involved all along in Caleb’s sad little life and unnecessary death.

Currently, we have approximately $1,700 left over from the first Caleb fundraiser for the hiring of the PI. Another fundraiser was started for a memorial in a pet cemetery but due to a glitch or misunderstanding, all the money was automatically refunded to the donors of this second fundraiser. So if you have not donated please do so, NO MATTER HOW SMALL. Or if you have received a refund, please consider re-donating. We will keep you updated of the officials' decisions. If the memorial happens to be rejected, then all the funds will be donated to a worthy animal advocacy group as originally proposed on the first fundraiser. Link to donate: https://www.youcaring.com/calebsmemorialandfinalre...