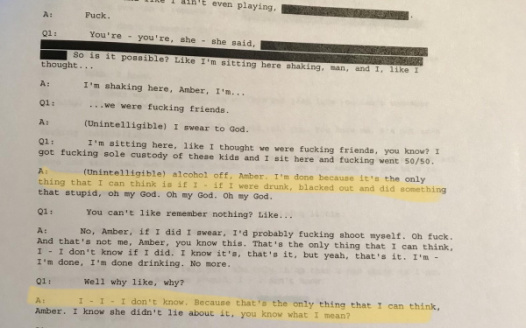 In July 2016 my daughter came to me completely distraught and informed me that she had been being raped by her father for the prior 3 months. I immediately called police. We had done a recorded phone call and the following was said, word for word:

"I'm dumping all the alcohol off, Amber. I'm done because it's the only thing that I can think is if I - if I were drunk, blacked out and did something that stupid."

"It's the only thing I can think of, Amber. I know she didn't lie about it."

"Amber, if I'm blacked out drink that is one scenario that could be a good possibility. Goddammit. Oh my God."

"It wasn't a conscious decision if it did happen."

"If it happened, I was blacked out. I don't know what to say."

Now, through the entire police recorded phone call, he was able to tell full stories about other girls he was sleeping with. But, anytime I had asked if he raped my daughter, he would say only if he was blacked out.

CPS has stripped his rights. He is no longer allowed to see or speak to them. I had to leave the state because their anxiety was so high they couldn't sleep at night. They were scared to death he was going to find them.

The police sent the case to the city for domestic violence. The city prosecutor was dumbfounded and said that the case needed to be with the county for felony charges.

The county came back saying that they weren't going to file charges because his beat around the bush, nonchalant, 48 page, indirect admission isn't enough. They are literally allowing alcohol to serve as an excuse to not prosecute.

My children have been dehumanized. They have been silenced. I am so crushed and heart broken.