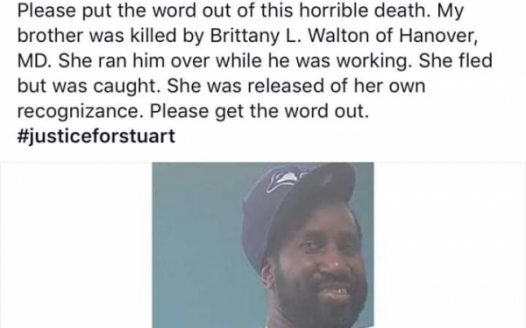 Stuart A.R. Johnson Jr., 41, was working for McCarthy Tire on Sunday evening when he went to change a tire on a Megabus, police said. State police said troopers were called around 6:30 p.m. Sunday to the northbound lanes of the parkway north of Route 100.A car hit and killed Johnson and took off. A witness followed the car and called police."The suspect's vehicle became disabled because of damage that occurred from the crash. When it would no longer run, she bails out in the area of the B-W Parkway and (Interstate) 195. Police searched for her in the wooded area and found her a short time later," Maryland State Police spokesman Greg Shipley said. Police arrested Brittany L. Walton, 23, of Hanover, on outstanding warrants from Baltimore City for animal cruelty and burglary. Police said charges are pending for the crash. Walton was released on her own recognizance. Since, Brittney Walton has not received any charges for the death of Stuart Johnson. We are seeking justice by petitioning to Governor Larry Hogan for Brittney Walton to be held accountable for his death. Stuart leaves behind three children.