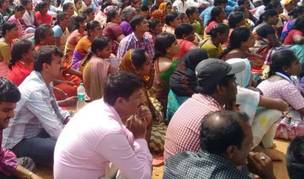 There are Big Bazaars, Reliance Fresh, etc. and even smaller super markets in every part of Bangalore city. But, the majority of the city's populace cannot buy from such places. Earning only minimum wages, the majority of Bangaloreans live a hand-to-mouth existence still depending on ration shops and travelling by buses. This majority also depends on the street vendors for purchasing their daily essential items and services including food, vegetables, clothes, house items, etc. We are those street vendors from whom the majority of Bangalore buy their essential items at reasonable and affordable rates!

However, the local authorities and the police department are not happy to let respectable, self-employed vendors carry on their livelihood in peace! Since May 2015, the Broadway traffic police station staff have been harassing vendors of Shivajinagar and not letting them vend. If the vendors do try and vend, they are chased, beaten with lathis, and their mothers and sisters abused! “Soole magane”, “Bewarsi” are the words that easily flow out of the corrupt police's mouths as they harass vendors. Because of this, street vendors have not had a proper income since May 2015! People have not been able to pay rent. The vendors are taking loans to even pay for food and rent. In a land where corrupt politicians, policemen and officials enjoy, why are hard-working, law-abiding street vendors made to suffer? And we have brought this to the attention of all the concerned officials and authorities. The Karnataka govt. doesn't seem to care about these toiling masses.

Street vendors are not against the interests of pedestrians who are, in fact, our customers. We are pained that pedestrian safety is being misused by the traffic police to harass us. We would also like to bring to your notice that the Justice Verma Committee report on sexual violence against women has also recognized that street vendors make the street safer for women and, as a result, must be encouraged. The Supreme Court, recognizing the injustice meted out to street vendors, passed a judgment protecting the street vendors from precisely the kind of eviction that has taken place in Shivajinagar. Parliament has upheld the right to livelihood of street vendors by passing the Street Vendors (Protection of Livelihood and Regulation) Act of 2014. Our own High Court of Karnataka has mandated the compliance with the Street Vendors Act. Thus, any move to evict vendors is clearly Illegal! In spite of all this, the traffic police continues to violate the law and evict vendors, harming both us and our customers and also the people on the street. We have met the concerned traffic and BBMP officials, submitted memorandums and even staged a protest. In spite of all of this, the police continue to act Illegally! Where do we go to when the police break the law? When senior IPS officers lead this violation of the law, whom do we turn to? We demand answers to these questions!

We request you to direct your police officers to -

1. Stop harassing street vendors and not to intervene in our vending activities by threatening to evict us

3. Approach the BBMP (who is the nodal authority) to resolve issues with street vendors, and not through brute measures