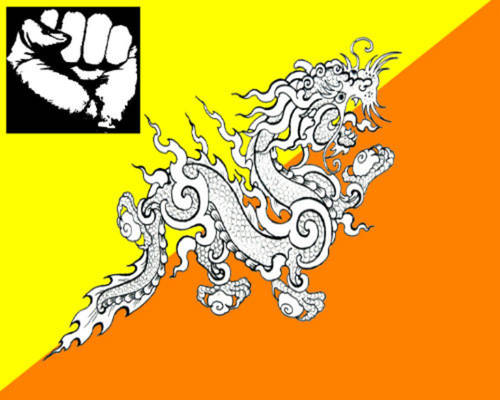 Let us all help her get the forensic examination of her mothers' thumb impression done and most importantly lets help Dr. Shacha Wangmo get Justice she and her family deserve.

This is Shacha's story today as written by herself,

I am Shacha Wangmo, 26 years old from Chandana, Toebisa, Punakha. I am a doctor by profession. I graduated from the University of Kelaniya, Sri Lanka in 2014.

I have a very small family. I have just one older sister. My sister and I were brought up by a single mother after my father’s demise. My mother worked very hard to give us a comfortable life and a good education. It was her dream to see me become a doctor.

This is how everything started:

I have an estranged brother-in-law who had borrowed around Nu. 7 lakhs almost 2 and half years ago from a person called Ap Sonam Phuntsho, the proprietor of Bumthang Sonam Kuenphen school, who does not fail to let everyone he meets, know that he is the father-in-law of the current Chief Justice, Lynopo Tshering Wangchuk.

Somehow my brother-in-law couldn’t pay back the money and Ap SP started adding compound interest. After compounding for some time, the amount reached 30 lakhs from 7 lakhs as per ap SP’s calculations. Then Ap Sp found out that my brother-in-law has nothing on his name so he made my sister sign as an agreement stating that my sister borrowed 30 lakhs from him. The worst mistake my sister did was listening to my brother-in-law. She also hid this from my mom. Then Ap SP started adding interest on the 30 lakhs. He knew my sister’s weak points- she listened to her husband and was hiding things from her mother. He took advantage of this, and even started eyeing our property in Changzamtog.
The property at Changzamtog is a five-stored building comprising of 21 units with joint ownership. The Thram is in my mother and my sister’s names. Ap Sonam Phuntsho maintains that my mother and sister sold the building to him at Nu.350 lakhs on 31st March 2014. He claims to have signed the agreement with my mother and sister in Thimphu, and that he has paid Nu.120 lakhs as token money. My mom had no idea about this. My sister, by then, had tried seeking judicial help. She appealed to the district court against Ap SP. She still hid everything from my mother fearing that my mom would get sick since she is a heart patient.

District Court Bench four
When I came to know about the case, the verdict was almost being passed in favour of Ap SP. The verdict stated that the building belonged to Ap Sonam Phuntsho. This was happening without my mom’s knowledge and consent. I appealed to the court stating that I, being the daughter of Aum Tandin Bidha had some right over the property (that was the only way to halt the court proceeding). The court kindly gave me a week’s time to study the case. In that one week, I discovered that the thumb impression of my mother on the sale deed was forged, and that my my sister had been forced to sign several documents under compulsion. She had appealed to the district court stating that she had been forced to sign the documents under compulsion, and that she had been conned.

I tried my best to settle the matter outside the court so that I could keep my mom away from the stress. I didn’t want to worsen her sickly condition and give her a heart attack. I went and met Ap SP. The first meeting itself gave me a clear picture that he is not human. I asked him if he could tell me the real amount without compounding interest, so we could settle things peacefully, but all he said to me was that he was not going to budge an inch. He told me to my face about another case of his (Major KT Penjor’s wife owed him 17 lakhs which he compounded to 79 lakhs. He had the guts to tell me all the details to prove that he could compound interest any way he wanted). I warned him that if my mom appeared in court, he would get penalized. But he was so confident that nothing and no one would be able to penalize him. Now, after having gone through the whole judiciary system, I know why and how he was so confident. At that time, the judiciary system was alien to me. All I knew and believed was that justice prevails, and truth always wins. Now, I know how stupid I was.

After a while, I had no option but to involve my mother. I had to tell her about the case, but sadly on the day that I told my mother, my sister disappeared. It has been almost two years since she disappeared. She is still missing. We have no idea about her whereabouts. We don’t know if she is alive or dead, whether she ran away on her own or whether someone conspired to keep her away from the case. If she was here, things would have been really easy and simple. My mom prays every second for her to return to us soon, and safely.

After everything was laid bare to my mom, she bravely acted on the situation. She appealed her case to the district court (same ongoing one) stating that she and my sister had not borrowed any money and nor had sthey old any property to Ap SP. She requested the court to send the thumb impression for forensic examination, and also consider BNB as a first rightful mortgagee. That was when Ap SP confessed that the forensic examination was not required as it was not my mother’s. He also confessed that he had not paid the amount to my mother and sister. After his confession, the district court passed a verdict stating that all the agreements were invalid. Since the signatures on the receipts produced by Ap Sp were tampered, the property’s first rightful owner is BNB, and then only my mother Tandin bidha. Ap SP was warned.

Ap Sp appeals to High Court
My mother and I met with the Chief Justice after the high court passed the order to freeze our house rent, stopping us from paying the loan installment. We assumed that his father-in-law must have been abusing his name without his knowledge so we tried to explain our situation to him, but he refused to listen. We told him about his father-in-law threatening us several times using his name. Sadly, we could not convince him. He asked my mother to leave his office repeatedly, but my mom persisted in pleading. I got frustrated, and was very disappointed in him. I literally dragged my mother away from his office after saying several nasty things to his face. Someone as ordinary as me got away with this behavior because I believe his conscience was not clear.

High court:
The high court nullified the detailed investigation done by the district court (without any clarification) and passed a verdict stating that my mother, Tandin Bidha, is liable to pay the huge amount of Nu. 195 lakhs to Sonam Phuntsho within 3 months. If she fails to do so, the building has to be handed over to Ap Sonam Phuntsho. The court completely wrote off BNB as the first mortgagee. In fact, the legal representatives from the BNB were not even called for hearings.

Supreme Court
I, on behalf of my mother appealed to the Supreme Court. All we asked for in our appeal was to send the thumb impressions on my mothers name for forensic examination and consider BNB as the rightful owner, but after sitting on our case for about five months, they dismissed the appeal stating that there was no basis the and High Court had passed a just verdict.

I finally appealed to His Majesty in January 2016 after which the case was reopened. Again during the hearings, we only requested them to send the thumb impressions on the sale deed for forensic examination, and consider BNB as a first rightful mortgagee. But every hearing has disappointed me more and more.

When my mother repeatedly requested for the forensic examination of the thumb impression and Ap Sonam Phuntsho’s source of income, my mother was told that the “forensic examination must have been already done by the lower courts.” This clearly indicated that they had not gone through the documents submitted by the district court. Instead, my mother was questioned about how she managed to build two buildings in Thimphu. They never asked Ap SP about his income source, and how he manages to have a lot of cash to lend to people. Throughout our court journey, no one asked him to justify his income.

We approached ACC too. The Commissioner there asked his staff to write a detailed story but asked us for additional evidence. They asked us if we had phone records or people as witnesses. I know they are just doing their job, but how can ordinary people like us get the phone records of such mighty people? We were wasting our time there.

Our appeal to all level of courts is to verify the thumb impressions on the agreements that are supposedly my mother’s. My mother has not borrowed any money from Ap Sonam Phuntsho. In fact, my mother saw him for the first time only in court. My mother is the rightful owner of the property that Ap SP claims to have bought. He has encroached on private property and has even taken furniture from our building while the case is ongoing and the court has banned the legal owner from collecting rent. Ap SP appears to be the most powerful person today. He is above the law. He is not punishable for forgery nor for money laundering. He is not punishable for trespassing. His admission to such unlawful acts does not mean anything to many of our judges.

I do not believe that justice will prevail even this time round. I cannot even bring myself to hope."