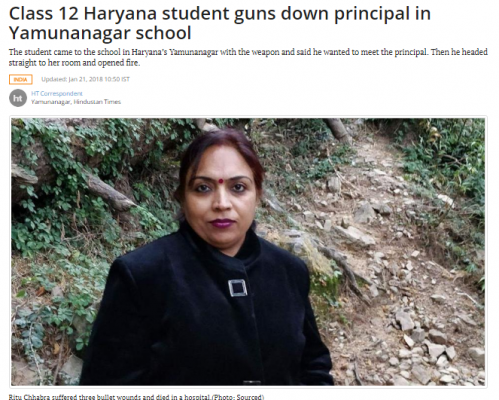 619 people have signed this petition. Add your name now!

THE PETITION IS MEANT TO GET JUSTICE FOR RITU CHHABRA!
AND TO GET THE CULPRIT HANGED TO DEATH FOR THE HEINOUS CRIME HE DID!

WE WANT THIS PETITION TO REACH THE PMO, Narendra Modia and CMO Haryana

Below is the detailed analysis of the Incident:The student walked inside the office of Swami Vivekanand School principal Ritu Chhabra during a parent-teacher meeting and fired four shots

The Principal of a private school was shot dead by a Class XII student inside her office in Haryana's Yamuna Nagar on Saturday.

The student, who is said to have recently completed 18 years, walked inside the office of Swami Vivekanand School principal Ritu Chhabra around noon and fired four shots from the licenced revolver of the student's father.

“Three bullets hit the principal. While one bullet each hit her on the face and the arm, the third bullet that took her life hit her in the chest. She later succumbed to her injuries in hospital,” Superintendent of Police, Yamuna Nagar, Rajesh Kalia told The Hindu over phone.

A few students and their parents were present inside the office for a parent-teacher meeting when the student walked inside carrying the weapon and opened fire at the principal. “One of the parents along with the staff caught hold of the student and handed the student over to the police,” said Mr. Kalia.

The preliminary investigation suggested that the accused was not good at studies and bore a grudge against Ms. Chhabra who had scolded the student on a few occasions for this.

Mr. Kalia said that a case has been registered against the student’s father as well under the Arms Act and efforts were being made to arrest him. The father, who is a financier, is on the run following the murder.