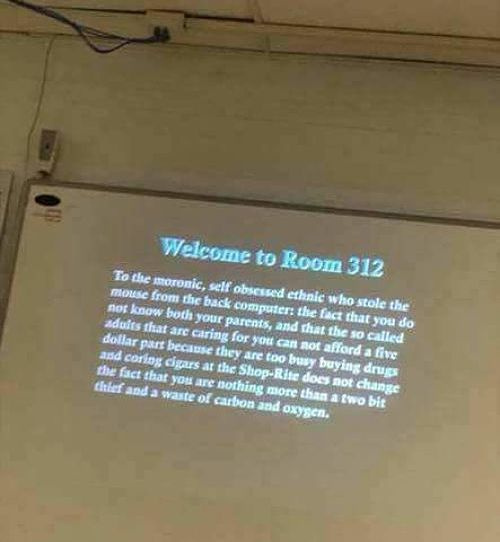 Welcome to Room 312 (Justice for P-Nasty)

So, as most of you know, Mr. Perez, AKA P-Nasty, has been swept up in the drama that this PowerPoint has provoked. I'm sure 99% of the students that attended Pickering and had Mr. Perez as a teacher will vouch that he has put up with a lot of BS from all of his students over the years. People have stolen from him. People have talked bad about him. People tried to fight him. He also suffered with some serious health issues recently.

But no one is talking about all of the good things that he has done for all of his students. I'm sure at one point in time, we have aggravated him and pissed him off and pranked him. But it's all in good fun. And he knows that, he was such a laid-back teacher. He understood how to take a joke, as well as deliver them. But, he is a wonderful person. He has helped so many students along the years, including myself, and pushed us to graduate. He has tutored some of us in his free time, during our years attending Pickering, before the school day started. He gave his students numerous chances at studying and did everything he could to help us to pass his class. He's a wonderful teacher, and I know we have all learned a lot from him.

I'm starting this petition because I feel that the students and kids nowadays are too sensitive and to sheltered, and they don't understand how to take anyting. They're all too fragile. What ever happened to tough love? So, some of you are trying to say that if you are stolen from, mistreated, and just all-around trampled on for years and years of your life, that you won't do something like this? These are just words. All he did was make a PowerPoint, that spoke the truth. Words aren't supposed to hurt you, and honestly, they shouldn't. We all know that. I petition that Mr. Perez suffer no repercussions and that he gets to stay at Pickering High School and continue teaching.