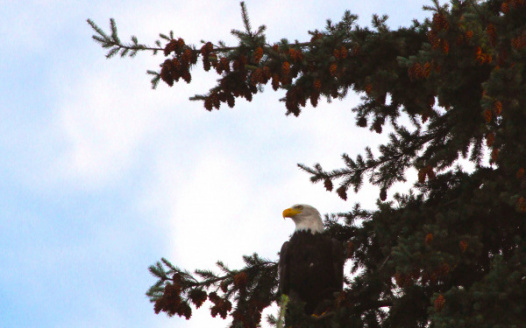 Located in the backyard of 2660 Trinity Street, a beautiful Douglas Fir tree native to the West Coast stood tall for more than 65 years before being violently cut down in a few hours on Friday, July 20, 2018. This tree was one of three planted many years ago by very proud parents wishing to commemorate the births of their children. The landmark tree was not only an eagle habitat but also offered protection and sustenance to other wildlife. Residents close by benefitted from its cooling shade during the hot summer months.

The City of Vancouver Building and Landscape Departments granted the current developer of 2660 Trinity St. relaxations to the Vancouver Building By-law to retain and protect this healthy tree during construction. The developer’s intent to get rid of this tree since the beginning has been well-documented.

There are effective means to ensure that the foundation design does not interfere with the associated root systems of trees, such as helical pile systems. However, the developer did not employ such a system and excavated the area adjacent to the tree for a laneway house. This deep excavation further damaged the root system, destabilizing the tree and necessitating its removal due to safety concerns.

Residents of Trinity Street and the Burrardview/Hastings-Sunrise community are outraged at the death of this tree and its removal.

We, the undersigned, are concerned citizens who urge the City of Vancouver to act now to impose stiff penalties against the developer and builder, for intentionally killing a majestic Douglas Fir tree.

*We would appreciate your postal code in the Comments section, to indicate the concentration of concerned residents in the Burrardview/Hastings-Sunrise community and across Vancouver. Thank you!

Note: To see the tree as it stood before it was killed, visit this Google Maps link: https://goo.gl/maps/5JysAE2gxG82