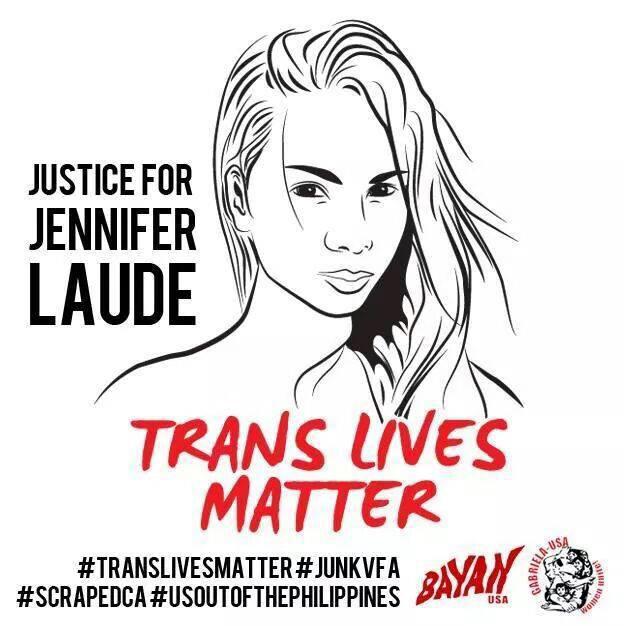 End Unequal Relations Between the Philippines and the US!

We are deeply saddened by the murder of Jennifer Laude, a 26-year old transgender woman from the Philippines, and express our deepest condolences to Jennifer’s family and friends. On October 11, Jennifer was found strangled to death in a hotel room in Olongapo City, Philippines. An autopsy report has shown the cause of death as “asphyxia by drowning.” The suspected murderer, U.S. Marine Corp PFC Joseph Scott Pemberton, is currently being held in detention aboard the USS Peleliu warship in Subic Bay. Her death, clearly the result of a violent hate crime towards transgender people, also underscores the ongoing inequality of joint US-RP agreements like the Visiting Forces Agreement (VFA), which give US military personnel impunity, as such was the case with Lance Corporal Daniel Smith.

Systemic violence and aggressive hate is a reality for LGBT people. Transgender people are treated as second-class citizens and their lives are systemically devalued and marginalized in economic, political, social, and cultural spheres of society. Transgender people such as Jennifer suffer from unspeakable violent acts and human rights abuses on everyday.

VFA is an Obstruction to Justice, Enforces Unequal Relations

At the same time, justice for Jennifer Laude hinges upon the treatment of the murder suspect in question, and under whose custody he will be placed and tried. The 2006 trial of Lance Corporal Daniel Smith underscored the special treatment of US military personnel who commit crimes on Philippine soil under the auspices of the VFA. Smith was charged and convicted of rape of a Filipina by the Makati City Regional Trial Court, was held at the US Embassy rather than a Philippine jail, and later acquitted and released by the Court of Appeals in 2009.

In Jennifer’s case, the VFA again poses as an obstruction to justice, with Pemberton still in the custody of the US military.

The tragic death comes just six months after President Obama visited Manila to sign a new agreement that expands the VFA and US military presence in the Philippines-- the Enhanced Defense Cooperation Agreement (EDCA).

This observation of one-sidedness is reinforced by a U.S. Supreme Court ruling that says treaties entered into by the U.S. are not enforceable in the U.S. unless there is an implementing law or if the treaty is self-executing. The VFA, which was not even ratified as a treaty by the U.S. Senate, has neither an implementing law nor is self-executing. It is inequality, and an affront to sovereignty, when the VFA becomes enforceable in the Philippines but not in the U.S.

The Smith and Pemberton cases are just two of the many problems that have arisen from the VFA, a military pact that governs the entry and presence of American troops in Philippine territory. The VFA provides for, among others, the deployment and stationing of U.S. troops and the holding of joint military operations in the Philippines. Unknown to many, U.S. troops have been stationed in the Philippines since 2002 up to the present. The extent of U.S. deployment in the Philippines increased during George Bush’s discredited “war on terror.”

Funding Human Rights Violations Instead of Saving Jobs and Homes in the U.S.

The holding of U.S. military exercises is tied with providing military aid to the Philippines, with an annual $30 million allotted by the U.S. Congress and hundreds of millions of taxpayer dollars in other assistance. The accumulated U.S. military funding for the Philippines from 2001 to the present may have already reached $1 billion.

Such a practice, however, becomes unconscionable when U.S. funding is used by a regime that - to borrow words from President Barack Obama- “clings to power through corruption and deceit and the silencing of dissent.” A 2008 US Senate Hearing led to cuts in US military funding to the Philippine government per documentary evidence involvement of the Armed Forces of the Philippines in extrajudicial-killings, enforced disappearances, forced evacuation of rural communities, illegal detentions, and torture.

The VFA, despite the military exercises and aid, provides absolutely no short-term nor long-term benefits to the people of either the U.S. or the Philippines. Filipino citizens have staged an escalating number of protests to voice their opposition to the Agreement and its violation of Philippine sovereignty. Several Philippine senators have also filed a resolution calling for its abrogation.

The Obama administration has vowed a departure from the Bush foreign policies. Terminating the VFA and removing U.S. troops from the Philippines would be a step in that direction.

END UNEQUAL RELATIONS BETWEEN THE PHILIPPINES AND THE U.S.!