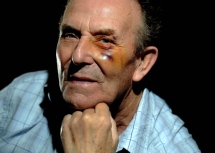 Bill Ramsay, 82, was left bloodied and bruised after being battered by Adam Talbot in his eighth floor flat in Farsley, Leeds, on Friday night.

Under new rules, he agreed to pay £150 in compensation and write Mr Ramsay a letter of apology and was banned from going near his flat again. If he fails to comply, he will be taken to court.

This is an absolute joke!!! How can a couple in Edinburgh get 12 months and 9 months respectively for behaving in a threatening or abusive manner and someone who ASSAULTS an 82 year old man get a slap on the wrist?

Mr Talbot is still employed by West Yorkshire Fire and Rescue Service, we need your support to make sure this man is sacked and justice is served!!!