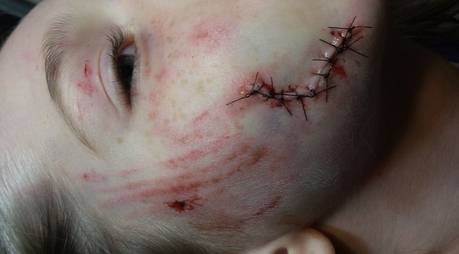 Friday, April 22 2016, 7 year old Adrianna was walking home from the bus. The neighbor happened to be walking his dog and she asked him permission to pet the dog, which he granted. Resulting in the dog viciously attaking Adrianna. Luckily Adrianna was with her dad, a volunteer firefighter, whose instincts immediately kicked in and he rushed her to the hospital. Upon arriving at the hospital and getting Adrianna checked in and in a room, he made a phone call to Mom, who was at work.

Mom contacted Animal Control, who is currently investigating the attack. Adrianna was not the first, she was the 6th. However, she is only the 3rd that was reported.

After 5 hours in the hospital and and being put under sedation to repair the damage to her face, Adrianna was on her way home with Mom, Dad, and Grandma.

We need to see this dog EUTHANIZED!! Adrianna was most definitely not the first, nor will she be the last if this dog is allowed to continue life.

Less than 4 inches farther down, and that dog would have severed her Carotid Artery, instantly killing her.