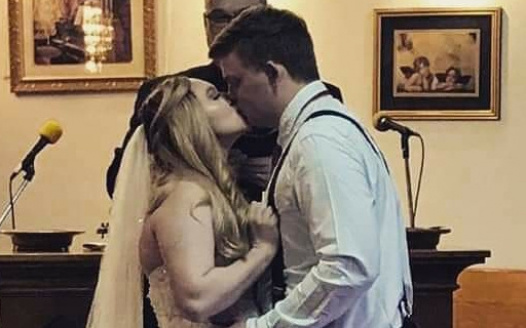 Almost 2 years ago my husband and i were at a bar in garrett indiana... We were out front of the bar when we heard a scream from the back of the bar. She was saying "get him off of me." "Help me." Multiple times... My husband and i darted towards the back of the bar to find adams female friend picked up off the ground from behind by a male... Adam punched this man one time and unfortunatly the male fell backwards and hit his head on a sidewalk piece (i should note that this sidewalk had been requested to be removed multiple times and never done)... Anyways fast forward to around january 2019 my husband is being charged with aggravated battery level 3 felony with a substantial risk of death. My husbands hired attorney did no negotiations and barely showed for court. On adams final pretrial court date his attorney was a no show... Adam asked for a new lawyer because clearly his was incompetant. The courts told him no! So adam plead guilty to the charge for fear of getting 20 years instead of the offered 12 years. July 17th 2019 my husband went in for sentencing with the same attorney who had failed him time and time again. They said my husband was an violant drunk and his mistaken belief that somebody was in harm almost cost a person their life. They sentenced him to 9 years due 7 years with 2 years hard probation. Let me tell you something about this aggravated battery they charged him with.. They couldnt prove intent to harm the man which is a key factor in this charge.. Adam always stood by his belief that he was protecting a woman in need never that meant to hurt this man. We have a 2 year old baby girl who adam fully cared for before he was so harshly sentenced to 9 years. I want adams voice to be heard i want justice to be served!The courts went on record and said it was an accident.. A mistaken belief and even the news papers said this. If it was an accident why does adam have to go to prison for 9 years. The justice system failed adam that day... They failed my beautiful 2 year old daughter who now suffers from seperation anxiety .. And they failed me a loving mother and wife. Im asking everybody who knows adam to please sign this petition for the court to give him a court date to correct errors.. Anybody who knows adam knows that he would never intentionally harm somebody and always puts everybody before himself. Thank you.