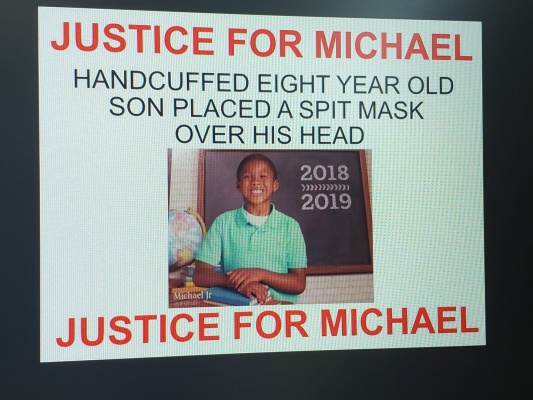 In February 2020 Michael Swapsy Sr. got a call from his 8 year old son's school principal, Sean Hollas; about an incident that day. "Your son is in handcuffs." Michael Swapsy's son was a 3rd grader at Explorer Elementary in Goddard, KS. He has ADHD so his teacher Darrin Downing has an IEP (individualized lesson plan) for Michael Swapsy Jr and his father had spoken to the teacher about known triggers that might set off certain behaviors. Darrin Downing used a timer (one of these known triggers) and the situation escalated to the point of the teacher calling in a school police officer, Johnnie Ogden, who then handcuffed the 8 year old child. Then officer Ogden called officer Terry Tompkins for back up. After 13 minutes they finally removed the handcuffs then tied his hands up and placed a spit mask (bag) over his head.

Because of this "incident" in what should have been a safe space for learning, the Swapsy family have decided that Michael Jr. will be homeschooled. They have started a Go Fund Me page Here to cover the costs of homeschooling him They hope that by bringing awareness to what happened to Michael and by having the State Department of Education reopen the complaint, that no other child will have to fear going to his or her classroom or school. No parent should get a call like that from their child's school. Michael Sr. is walking from Kansas to the 2020 Democratic convention in Milwaukee, Wisconsin August 17-20, to raise awareness you can follow him on Facebook, Twitter #BlackForrestGump2020