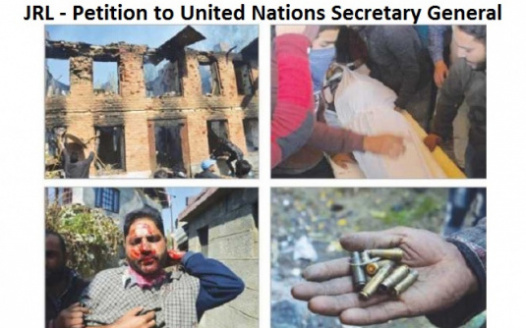 We urgently need to draw your attention towards the recent spree of killing and blatant abuse of human rights in Kashmir, in which Indian forces yet again resorted to the barbaric practice of death and destruction. A ruthless military operation called CASO (cordon and search operation) has been undertaken by the Indian state under whose garb civilian areas are cordoned and searched for armed freedom fighters and in the process civilians killed beaten and harassed and homes blown up.

On 21 October 2018 seven unarmed civilians were ruthlessly killed and hundreds injured by pellets, bullets and bombs at Laroo area of southern Kulgam district. On October 17 in the heart of Srinagar city, as per family sources a young man Rayees Ahmad Sofi was taken into custody by Indian forces, tortured whole night in front of his family and then killed in cold blood during custody. On October 19, a five months pregnant woman was killed by the government forces in Pulwama. The slain was identified as Firdausa Akhtar, W/o Khursheed Ahmad Sheikh, resident of Qasabyar Pulwama. The destruction of residential houses by planting explosives or by burning them down, devastation to vehicles and house hold goods besides killing has become order of the day. Even women are ruthlessly beaten and harassed. Despite repeated closure of educational institutions by the state to prevent protests, students repeatedly hit streets against killings atrocities, crackdowns, illegal detentions and space for expression.

There is no semblance of any civilian authority, even in the name, in Jammu & Kashmir. The state is run by a New-Delhi appointed Governor with military, paramilitary and police-force at his command who are hell-bent to crush the popular political movement of self determination of Kashmiri’s by bullets and batons. The overwhelming boycott of 95% by the people of Kashmir in the recently held Urban Local Bodies Elections in Kashmir has further frustrated the Indian authorities who have stepped up their vendetta against the people.

The horrible incidents of past including Kunan-Poshpora mass rape, Shopian, Machil, Chattisinghpora fake-encounters, massacres at Hawal-Srinagar, Gow-Kadal, Handwara, Sopore, Kupwara, Bij-Behara, killing of hundreds of youth in 2008, 2010, and 2016 mass uprisings besides countless unabated incidents of grotesque human rights violations in the form of fake encounters, forced disappearances, rapes everyday killing of un-armed civilians and destruction of property by Indian forces have inflicted deep wounds on the collective existence of people, the scars of which are etched on the conscience of Kashmir’s.

In the light of continuously deteriorating situation in Kashmir, we urge the United Nations to stop being a mute spectator and play its role in putting an end to the extreme repression people are being subject to by the Indian state by taking urgent steps for the resolution of Kashmir dispute which is the main cause of all suffering and human rights violations of people of Kashmir. The dispute of Kashmir being on UN agenda, with umpteen resolutions passed on it in the august body, it is the binding responsibility of United Nations to resolve this dispute as soon as possible in the light of the resolutions. UN can in the meantime ensure that human rights are protected in Kashmir and grave repression stopped. The people of Kashmir are suffering the killing of generation after generation.

We appeal to you and through you to all the member nations of the UN to intervene effectively to stop Government of India from committing crimes against humanity in Jammu & Kashmir and take all possible measures to address the festering wound i.e. Kashmir dispute so as to protect the population of the territory from the atrocities of the Indian apparatus of coercion and suppression which is essential for establishing permanent peace and stability in the region.

We sincerely hope that the United Nations does not err on the jurisprudence of the Rights Movement of the people of Jammu and Kashmir and holds India accountable for all the abuse of human rights in Jammu & Kashmir.

Excellency It’s an SOS from people of Kashmir