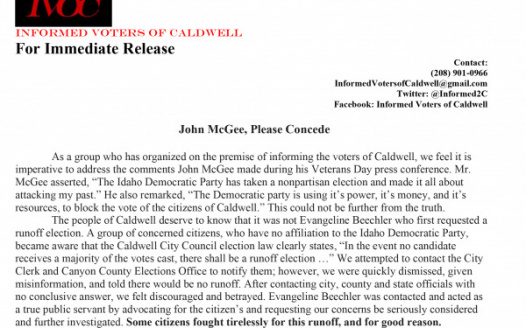 We ask you to join us in our efforts by signing this petition. There are still women within our community who are afraid of John McGee because of what he has done to them.

We believe no citizen should feel unsafe when left alone with an elected official.

As a group who has organized on the premise of informing the voters of Caldwell, we feel it is imperative to address the comments John McGee made during his Veterans Day press conference. Mr. McGee asserted, “The Idaho Democratic Party has taken a nonpartisan election and made it all about attacking my past.” He also remarked, “The Democratic party is using it’s power, it’s money, and it’s resources, to block the vote of the citizens of Caldwell.” This could not be further from the truth.

The people of Caldwell deserve to know that it was not Evangeline Beechler who first requested a runoff election. A group of concerned citizens, who have no affiliation to the Idaho Democratic Party, became aware that the Caldwell City Council election law clearly states, “In the event no candidate receives a majority of the votes cast, there shall be a runoff election …” We attempted to contact the City Clerk and Canyon County Elections Office to notify them; however, we were quickly dismissed, given misinformation, and told there would be no runoff. After contacting city, county and state officials with no conclusive answer, we felt discouraged and betrayed. Evangeline Beechler was contacted and acted as a true public servant by advocating for the citizen’s and requesting our concerns be seriously considered and further investigated. Some citizens fought tirelessly for this runoff, and for good reason.

We are very uncomfortable with John McGee holding any form of public office. As Judge Cawthon said during Mr. McGee’s sentencing hearing, “This happened in your capacity, and was the cause of your position as a Senator … And you picked a person who, when you look at the hierarchy and structure of things, … was weaker than you.” John McGee has proven by his past behavior that he is not above exploiting his position of power to abuse and intimidate those around him. Mr. McGee and his supporters would like to think he has served his time and moved past his illicit behaviors. However, we must advocate for all victims of abuse and acknowledge that the time of healing cannot be quantified by anyone other than the victims themselves. Since he has reentered the public spotlight, others have privately disclosed their own disturbing interactions with Mr. McGee. We have ample reason to believe this is a long-established pattern of predatory behavior. These stories are not ours to tell, but we do feel a responsibility to inform our community of our valid concerns. Victims of abuse often tend to suppress their trauma because of the justifications and excuses made for perpetrators combined with minimal sentencing for their crimes against humanity. Considering John McGee’s past, we believe encouraging him to serve as an elected official sends a demoralizing message to survivors of sexual abuse and the young people of our community who depend on us to make the best decisions we can on their behalf.

We would be happy to see Mr. McGee move forward with his life in the private sector, but electing him into a position of power could be devastating for our community. Mr. McGee has expressed multiple times that he is running for this position out of a desire to serve his community. With this new information coming to light, we would like to ask John and Hanna McGee, with the community’s best interest in mind, and for the continued healing of those who have come forward and those who have not, to respectfully concede from this race and allow all who were hurt by his actions to move forward with their lives to the best of their ability.

If John McGee does not concede, we urge the citizens of Caldwell to deeply consider what has been presented and how their choices could affect some of the most vulnerable members of our community. We believe no citizen should feel unsafe when left alone with an elected official. Please vote with us on, or before December, 3 2019.