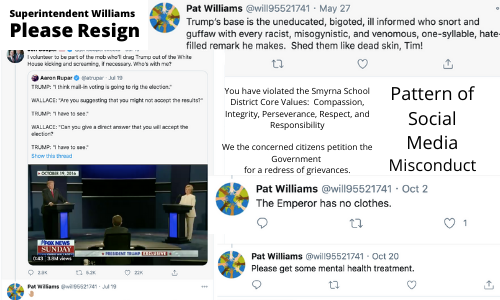 419 people have signed this petition. Add your name now!

We, the concerned citizens of Delaware, urgently write this letter to share our grave concern about Smyrna School District Superintendent Mr. Patrik Williams’ social media misconduct over the past year.

Superintendent Williams has developed a reputation for making irresponsible and offensive social media posts. When he was confronted about his behavior in August 2020, Williams claimed on a video on Smyrna’s youtube channel that he would never have behaved this way “999 times out of 1000”. Mr. Williams made excuses for his behavior, minimized it, and led the stakeholders to believe he would not post incendiary things on social media anymore. In fact, Mr. Williams failed to take the opportunity to provide a complete and genuine apology and continued making posts on twitter without board approval into the fall.

Thanks to concerned citizens, Rick Jensen WDEL and also a state legislator, the citizens know that Mr. Williams carried on a very public, divisive and aggressive twitter social media campaign from May until late Fall 2020. In one tweet, Mr. Williams even tweeted an emoji “hand raise” appearing to volunteer to be "part of the mob" to attack a federal government building and duly elected official in our nation’s capitol. It should be noted that his emoji hand raise is also used elsewhere on his twitter history to communicate intent to volunteer, sign up for.

With so many children depending on Mr. Williams and Smyrna District to provide a safe school learning environment and steady leadership, we are perplexed why Mr. Williams would carry on in such an irresponsible way. We, the stakeholders, worry he may be a threat to the safety of himself or others. No superintendent of schools with sound judgement would conspire, ideate or promote mob violence. That particular post is more concerning and traumatizing after the horrific events of January 6th, 2021.

As well, the Smyrna stakeholders are offended and saddened by another tweet in which Mr. Williams calls for an entire group of people to be shed like dead skin. The stakeholders cannot recall any of Smyrna School District Superintendents prior to Mr. Williams ever behaving in such a reckless, unprofessional and divisive way. His social media misconduct should not be condoned or enabled any longer.

Dr. Bunting, you have a reputation as a fair and highly effective Director of Education. We know that DOE demands a higher standard of leadership than this for the school superintendents. Our communities need to heal so badly right now. The stakeholders of Smyrna desire to work together with new leadership to overcome this pandemic and rebuild for a better future to give our children.

We ask you, Dr. Bunting, to please recommend to Smyrna School Board that Mr. Williams be relieved of his duties as School Superintendent and School Board Secretary as soon as possible. We, the stakeholders, have lost confidence in Mr. Williams’ ability to lead the school district safely, effectively and without prejudice against groups. Mr. Williams has already been corrected by the board, and apparently was given a second chance. See the youtube video of the August Smyrna School District Board Meeting apology on youtube for your reference.

As well, visitors to smyrna.k12.de.us can see that Mr Williams posted the following decree on first amendment rights in 2020:

Some may ask, “So, what about the First Amendment right to free expression of ideas, no matter how base or bellicose? Will this kind of expression be permitted, as well?” To those individuals we say, “No expression will be accepted that interferes with the orderly administration of education.”

By his twitter volunteering to "be part of the mob" and advising that an entire group of fellow humans should be shed like dead skin, it seems Mr. Williams has, in fact, violated his own decree and is disorderly. Smyrna School District should not tolerate or enable his behavior any further.