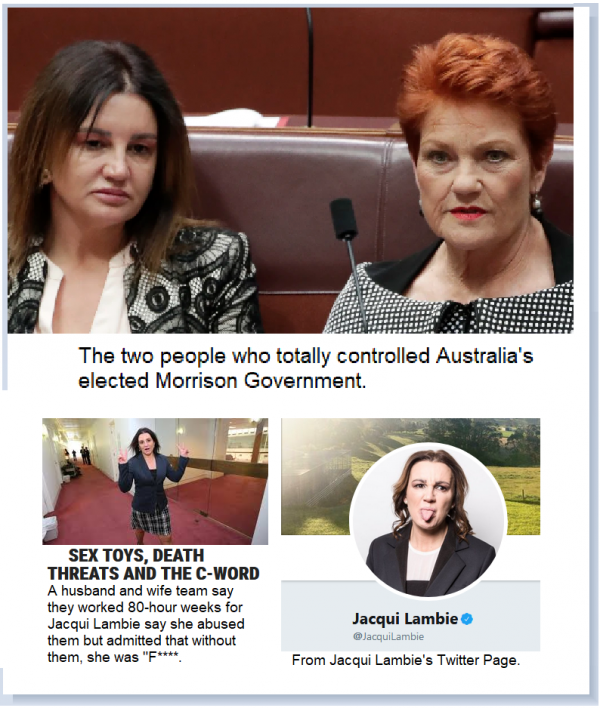 Foreword: the initiator of this petition, Peter Forde, is NOT politically active, does NOT support any particular political party and has for over ten years publicly asserted that the Australian political system is broken due, primarily, to a widespread lack of strong moral standards within all political parties and Australia’s bureaucracy.

Senator Jacqui Lambie (and Senator Pauline Hanson - see separate petition at https://www.ipetitions.com/petition/pauline-hanson-explain) have together thwarted the Morrison Government's attempt to rein in Australian unions, make them more accountable and and bring them under appropriate legislative control.

According to news reports, Senator Lambie was attempting to force the Morrison Government to include in the proposed legislation provisions that she - and only she - wanted.

It appears that Senator Lambie voted against the proposed legislation only because she did not get what she wanted.

Even worse, Senator Lambie has refused to publicly state what were the provisions that she demanded be included in the bill.

We the undersigned deeply concerned citizens herewith publicly request Senator Lambie to clearly and publicly state the complete details of her demand(s).

We also ask Senator Lambie to explain how our nation as a whole benefits from her deliberately preventing proposed legislation that would bring out-of-control, too-powerful unions under control and oblige their being held responsible for their actions.

We request that, by December 15, 2019, Senator Lambie post on the home page of her web site a clear, non political-speak statement that answers, in complete detail, our request.

Upon our viewing Senator Lambie’s explanation - her self-defense in the “Court of Public Opinion” - we the people shall be in a position to informedly, honestly and fair-mindedly judge the matter.

A refusal by Senator Lambie to both promptly and clearly comply with this public request shall be deemed to be her admission of wrongdoing, potentially greviously harmful to all Australians who do not support Australia's current form of out-of-control unionism.