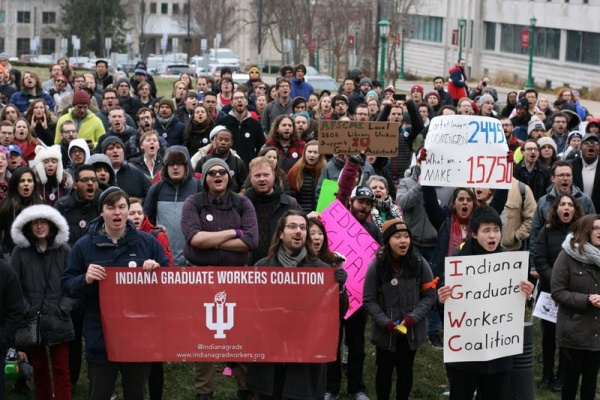 To the IU Board of Trustees, IU Administration, and the IU Community,

The National Labor Relations Board ruled in 2016 (364 NLRB No. 9) that “student assistants who perform work at the direction of their university for which they are compensated are statutory employees.” Moreover, the ruling noted:

the terms and conditions of graduate-student employment were adaptable to collective bargaining (as illustrated by experience at public-sector universities […]) and that empirical evidence contradicted claims that “academic freedom” and educational quality were harmed by permitting collective bargaining.

The NLRB concluded that “there is no compelling reason—in theory or in practice—to conclude that collective bargaining by student assistants cannot be viable or that it would seriously interfere with higher education.”

Graduate student workers, both international and U.S. citizens, have the right to support and participate in organizing a union without fear of retribution of any kind from the faculty or administration of Indiana University. The United States Supreme Court has held that collective bargaining inevitably raises issues of “substantial public concern” and thus implicates the exercise of free speech and associational rights protected by the First and Fourteenth Amendments. See, Janus v. AFSCME, No. 16-1466, 585 U.S. ___ (2018). Thus, for the administration to discourage Graduate Assistants in their efforts to organize and collectively bargain would interfere with their First Amendment rights. Such interference or coercion would also be a violation of University Policy HR-12-20:

Staff employees of the university will have the right, freely and without fear of penalty or reprisal, to form, join and assist any lawful employee organization, or to refrain from any such activity.

Further, attempts to speak out on Indiana University policy and conditions of employment are protected by Policy ACA-32 on “Academic Freedom,” which states:

Academic freedom includes the freedom to express views on matters having to do with the university and its policies, and on issues of public interest generally. When faculty write or speak as citizens, they should avoid appearing to be speaking for the university. They should recognize that a professional position in the community involves the obligation to be accurate, to exercise appropriate restraint, and to show respect for the right of others to express their views.

International graduate student workers may have particular concerns related to their nation of origin or visa status. We wish to emphasize that the choice to join or not join a union is protected under U.S. law regardless of nation of origin or current visa status. A Department of State statement on the Rights and Protections for Temporary Workers reads:

You will not be denied a visa or be punished by the U.S. government because you have exercised your rights under U.S. Laws. To the contrary, the U.S. government wants all temporary workers and employers to operate according to the laws of the United States, and encourages you to report any violations. If your recruiter, crewleader, supervisor, or employer tells you that you will be denied a visa for exercising your legal rights, it is not true.

The State Department further highlights the labor rights of those working in the U.S., regardless of visa status:

With few exceptions, you have the right to join together with your coworkers to ask your employer to improve your wages or working conditions. Most workers also have the right to form, join, and support a union in your workplace. […] You have this right regardless of your immigration status. Your employer cannot take action against you for asserting your rights.

Any discrimination against a student for their participation in or advocacy on behalf of unionization would violate University Policy and U.S. Law.

We caution the Administration and Trustees against attempts to “inform” graduate workers of the consequences of unionization or otherwise to cast doubts on the process in which they are now engaged.

The choice of the graduate student employees whether or not to join a union is solely one of the employees themselves. The IU Administration, including the Department of Human Resource and the Office of International Services, is not entitled to arbitrate the election or to intervene with an attempt to sway the electorate. We ask the IU Administration to refrain from any attempt to influence the opinions of graduate workers, even ones couched as attempts to “objectively inform employees of their rights.”

We encourage graduate employees independently to seek out information about joining a union so they may be fully informed in their decisions—to speak to fellow graduate students; to seek expert opinion; and to participate in an informed process of decision-making.

Bradley A. Levinson, Professor of Education