Take Istanbul out of the list of cities for Olympics 2020 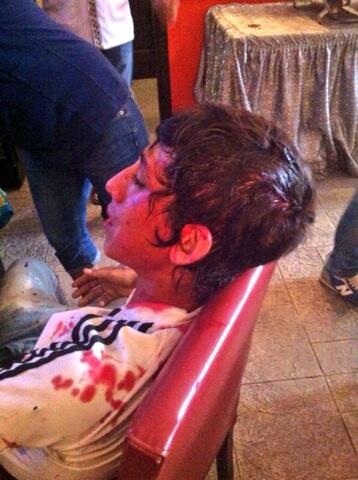 ( photo of a 13-year old child injured in the police attack on the protest.)


This is an urgent call to the International Olympic Committee (IOC) from Istanbul Valuable members of the IOC; This is an urgent call from Istanbulites, from all ages, social and political backgrounds, associations, ideologies and beliefs. This is a call from Urban Movements Istanbul / Habitat International Network together with People’s Houses on behalf the citizens of Istanbul whose right to life has been threatened by a government determined to crush a peaceful resistance against the demolishment of a public park ( Gezi Park) by means of unproportional use of force through excessive utilization of tear gas and pepper gas bombs over limits, the use of plastic bullets and more over the deliberate use of canisters as bullets to target and hit armless people. Up to now the police has intervened and used brutal force 4 times in Taksim against peaceful demonstrators; the last one taking place this morning. There are 3 deaths and after this morning’s violent attack, we are afraid that there may be more losses. The resistance has spread to the other cities and there are nearly 10,000 people injured throughout Turkey, 23 of which fatal. The right to peaceful assembly and to demonstration, the right to expression, to freedom of opinion and to life have been and is being (at the moment as well) grossly violated by the government. Valuable members of the IOC, the ideals of Olympic Games rest on friendship, peace, democratic values and freedoms. We are sending you just 3 of the hundreds of videos documenting the unproportional use of force by the police; these are material evidences of the brutality and are more than enough proof of how the government violates the ideals of Olympics.
Having Istanbul on the list of applicants will be tantamount to pepper gasing these ideals. Having Istanbul on the list will mean bombing these ideals. Keeping Istanbul on the list disgraces Olympic ideals. We, as Istanbulites whose lives are under threat, request the IOC to take Istanbul out of the list of cities for Olympics 2020 in order to reclaim the honour of Olympic ideals. On behalf of On behalf of Urban Movements Istanbul / HIC Network People’s Houses Cihan Uzunçarşılı Baysal Çiğdem Çidamlı